Why Use Enterprise-Level Digital Analytics?

Making the decision to move to an enterprise-level analytics tool is no small decision, and deserves to be considered carefully with the person and company weighing their options and making the decision that makes the most sense for their business.

To start, how does one know if they need an enterprise-level analytics tool to begin with, and what does this even truly mean?

You’re likely to need an enterprise-level analytics tool if:

If these descriptions don’t match what you need at this point, then it’s likely you are best served with free Google Analytics (GA), and can explore ways to leverage that system here.

If any of these descriptions are ringing true for you and your business, it’s likely that you should at least be considering an enterprise-level analytics tool such as Google Analytics 360 (GA 360) or Adobe Analytics.

If these descriptions hit the nail on the head for your business, it’s highly likely that you’re missing out on information that could help you make better decisions, or on the flip side, are currently making poor decisions due to inaccurate/limited data quality.

If you find yourself and your business falling into one of the latter two groups, let’s discuss what GA 360 and Adobe Analytics have in common as well as their differentiating factors.

What Adobe Analytics & GA 360 Have in Common

While GA 360 and Adobe Analytics certainly have some notable differences (and we’ll touch on those), there are a lot of areas where they are similar, and these are worth reviewing before we dig too much into the differences.

Integration Within Their Respective Marketing Stacks

One of the best things that both tools do here is their integration with their respective marketing stacks for nearly all areas.

GA 360 gives the user the ability to integrate with other Google tools such as:

Ultimately, both tools do a great job of providing cross-platform benefits for “full stack” users of Google or Adobe tools. Where things get complex is if you are using tools cross-platform or trying to migrate from Adobe > GA 360 or vice versa.

It’s worth a note here as well; both platforms also have premium tagging solutions with GA’s being GTM 360 and Adobe’s being the new advent of Adobe Launch (replacing the previous Dynamic Tag Manager (DTM)). Important to note, Adobe DTM is being sunsetted in January 2021, and any net-new tagging systems for Adobe must be on Adobe Launch.

The creators of both tools realized that an extremely common problem and use case for data analytics is the necessity to process a large amount of data, and to have that data be accurate at a pinpoint level.

GA 360 has specific features for this beyond just raising the hit limit within the tool. It has specific, additional functionality such as custom tables and unsampled reports (see tip #1 in this blog post), to ensure that you’re never lacking in your ability to pull accurate data.

Adobe Analytics has more unsampling out of the box in the interface, but it’s important to note that there are still limitations depending on the amount of data that you’re leveraging (such as Low Traffic values), similar to (other) in GA page reports. However, when using Adobe Analytics, you don’t have to take the same steps as in GA to set-up unsampled reports or custom tables in specific situations to ensure your data is unsampled.

Ultimately, both tools get at unsampling of data in slightly different ways, but both provide robust systems to ensure your data is accurate and useful.

Verdict: Slight edge to Adobe Analytics (due to data always being unsampled out of the box)

While anyone can use the in-platform analytics reports itself, a lot of “power users” for each tool will want to go straight towards more flexible solutions for what they need.

Google’s solution for this is Advanced Analysis, which provides a flexible set-up to look quickly into data trends, pathing, and segment overlap. This proves useful, and as a non-GA 360 feature, Google Data Studio also heavily assists in this area as well.

Overall, this a super flexible way to analyze GA data without doing the heavy lifting of being directly in GA reports.

Adobe’s approach for this is honestly more critical for their platform, because as we’ll get to later, Adobe’s in-platform experience can be complex, confusing, and overall more challenging then GA’s. However, despite those challenges with in-platform analysis, Adobe provides excellent tools to get your insights quickly, with Analysis Workspace’s insane flexibility, combining the best aspects of GA’s Advanced Analysis + Data Studio in one. It’s hard to not look at GA’s Advanced Analysis and see traces of Adobe’s innovation with Analysis Workspace. 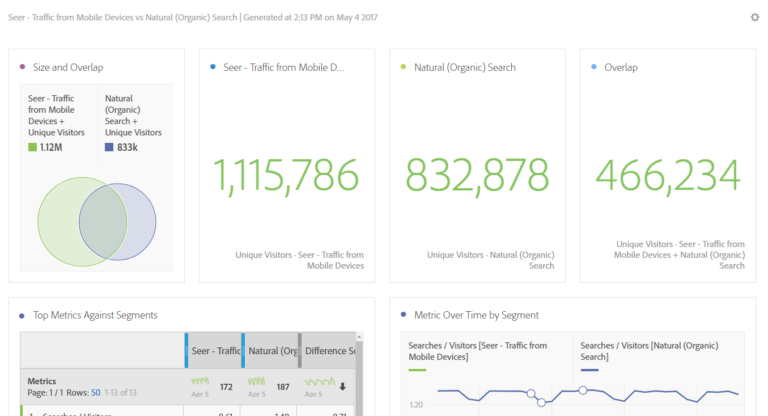 Adobe also provides access to Report Builder as well, which is a nice complimentary tool for automation with Microsoft Excel if desired.

Ultimately, Adobe gets a slight edge here for having these tools in place earlier (giving them more time to develop them), but Google is quickly gaining ground with their updates to Advanced Analysis and Data Studio.

One of the benefits of an enterprise-level analytics tool at its heart should be the ability to customize your analytics implementation to fit your specific needs and solve your specific problems for your business.

GA 360 provides a lot of customization, most clearly with the increase in the amount of custom dimensions and metrics that you can leverage. Beyond this, the ability to leverage BigQuery for cloud computing layers on another level of customization for quick and useful custom analysis.

For Adobe Analytics, the system itself is inherently built to be custom-focused with no free analytics solution. With the ability to leverage eVars, sProps and success events for greater data capture and areas like in-depth classification systems, the customization options are close to limitless. Adobe also utilizes a system similar to GA with Adobe Data Warehouse, that can operate with similar, albeit slightly more limited functionality then BigQuery (data limits, limited export options, etc.).

Ultimately, both tools have more than enough customization options, making both of them quite flexible for custom tracking needs.

Differences Between Adobe Analytics & GA 360: Where Adobe Wins Out

There is one clear area from my experience that I feel Adobe Analytics is currently stronger than GA 360, and that is analysis of user website pathing.

Adobe Analytics comes out of the box with incredible pathing report options such as Full Paths and the Analysis Workspace example of this with Flow Overviews. This functionality helps for analyzing paths in incredible detail, either as specific or as general as you would like. 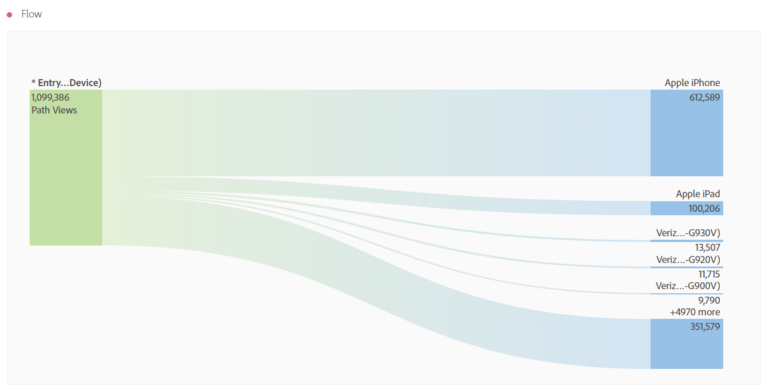 If you do find your company needing more in-depth pathing analysis, you can utilize Adobe’s PathFinder tool, specifying set entrance and exit user paths, as well as the specific type of content viewed.

Google Analytics technically has Next Page Path and Previous Page Path, but those are largely deprecated and not useful. Even if they were still active, they still wouldn’t be at the level of Adobe’s pathing tools. The most out of the box pathing option for GA 360 is custom funnels, but there are some slight limitations and this set-up requires a very prescribed expectation of a user path and less of a free flow evaluation that Adobe’s more nuanced tools allow for.

The closest way to get pathing similar to Adobe in Google Analytics is the hit-timestamping of all hits via a custom dimension, and then utilizing BigQuery for pathing analysis, which becomes much simpler with GA 360.

Differences Between Adobe Analytics & GA 360: Where GA 360 Wins Out

There are a few key areas where GA 360 edges out Adobe Analytics, from extremely simple items to complex processes made easy with GA 360. Let’s start simple:

GA 360 (or even just normal GA for that matter), is an inherently easier system for a user to navigate and quickly get the insights that they need.

Adobe’s highly customizable layout makes it extremely tricky and time consuming to pull what you need, and that’s a main reason that Analysis Workspace is such a lifesaver for Adobe Analytics’ usability. If getting full company buy-in and utilization of a tool is important to your company, this immediately gives GA 360 a big leg up there.

It can even come down to things as simple as terminology between the two systems itself. If you don’t have intricate knowledge of an Adobe Analytics implementation, it can be near impossible to reverse engineer exactly what’s going on with "custom eVars" and "sProps", while a user can relatively easily find what they need in GA 360 just by browsing around with easy to navigate categories.

In this sense, GA 360 makes it much easier to get the data you need for a basic user, while for power users, GA 360 vs. Adobe Analytics are closer to even.

To put it simply, if you have Salesforce Sales Cloud, with GA 360 you get the ability to get closed-loop data quickly and the ability to analyze in a scalable manner. GA 360 blows Adobe Analytics out of the water for Salesforce closed loop.

This single integration takes what can often be an 8-12+ month process for closed-loop and turns it into a 3-6 month process that could theoretically be done sooner if prioritized properly internally. These time differences are similar when comparing BigQuery vs. Adobe Data Warehouse for cloud computing as well among the tools. 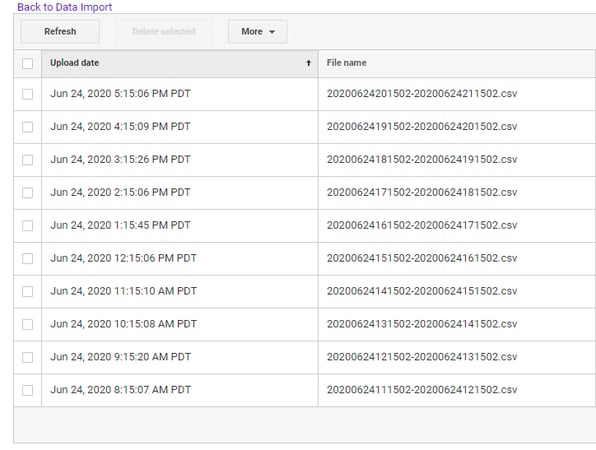 And the benefits are immense! Actual ROI on your content and marketing efforts are available quicker. GA 360’s turnkey integration here has massive benefits. And, if you use Marketing Cloud for Salesforce as well, Google has you covered as well.

So, given all of this, what should you do?

To summarize the pros and cons for each mentioned above:

Still unsure of which direction to go after that list? A few use cases below:

The benefits of each system in relation to their integrations within each stack are great enough that it would be fairly nonsensical to NOT leverage them.

If you already have a free version of Google Analytics, you do get the benefit of historical data being upgraded by moving to GA 360, and not having to replatform is likely a big enough cost and time savings that you should upgrade to GA 360.

Roughly speaking, migrating from Adobe > GA 360 (or vice versa), would take a minimum of 10-12+ months to be done correctly and accurately (i.e. with minimal data loss and clarity for teams and stakeholders heading into the process).

If you are utilizing Salesforce Sales Cloud and want closed-loop, it’s honestly a no brainer for GA 360.

Ultimately, all other things being even, both GA 360 and Adobe Analytics are relatively even enterprise-level data tools, but GA 360 gets the slight edge for us given the ease of use for new users and our experience with the rate of adoption for clients onboarding GA 360 vs Adobe Analytics.

Now that you have this info, which tool makes the most sense for your business? If you are interested in chatting about GA 360 or Adobe Analytics with Seer, please reach out to us below: