What would you do with 15% more marketing budget? Contact us.

How Does This Happen?

Pop culture and news references bring new meaning to existing words and new words into the SERPs everyday. Like when a rapper dropped a song called "Bank Account" that cost the finance industry millions.

The problem gets worse with Google's recent play to expand "same meaning" close variants to broad match modifier and phrase match keywords, in addition to the exact match close variants that rolled out late last year.

We were bidding on [ga 360] and with this new update, Google matched us to 360 Georgia. People looking for a powerful web analytics tool are probably not going to have their questions answered by a site that sells peach flavored vodka.

This is happening everyday, but Google is not giving us the tools to find it.

What is Saving Benjamin Pro?

Seer built a tool with the help of some outside developers called Saving Benjamin Pro, which pulls search query data directly from each client's Google Ads account using the Google Ads API. We then use chi squared statistics to determine word relevancy, utilizing competitor rankings for our paid search terms as inputs. The tool lists out search query themes and how often they’ve been searched, then you can classify them based on whether they should be negated or not. 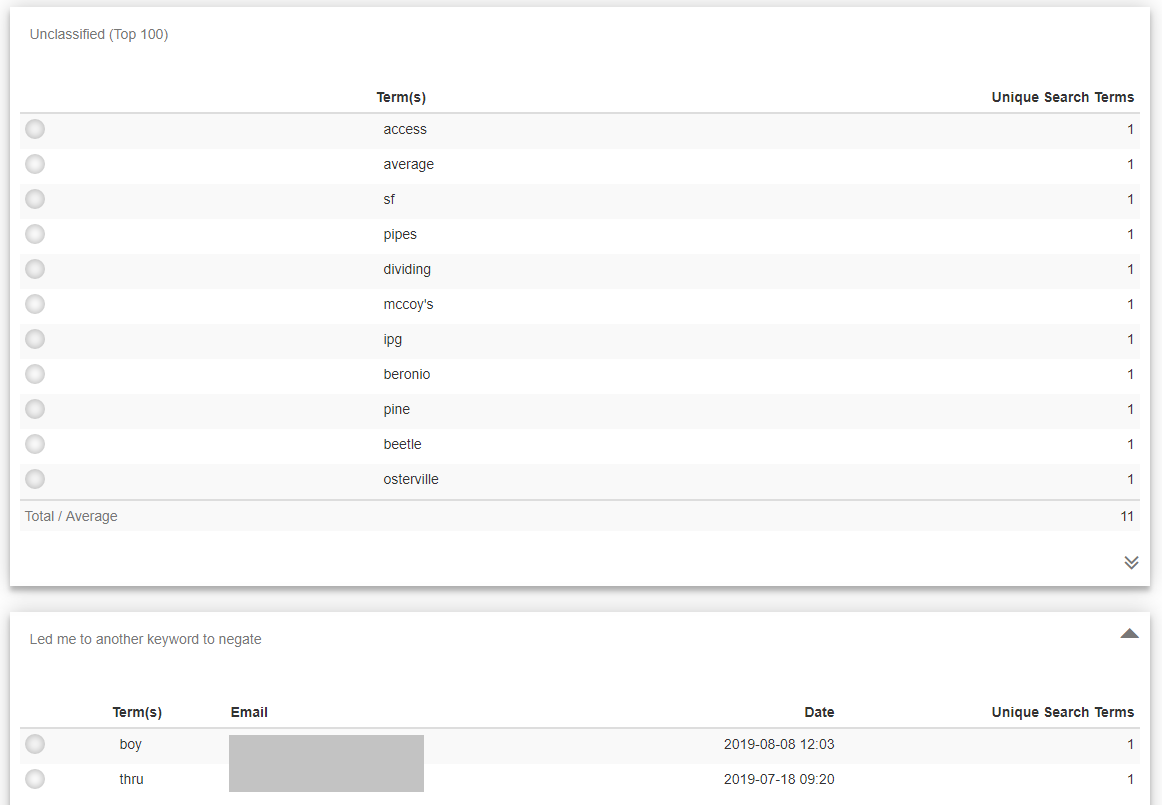 Ultimately, Saving Ben Pro is a more efficient way to identify themes to negate at scale, or themes to dig into for keyword and content expansions. That's why we use it on every one of our full-service PPC client accounts and in our PPC Efficiency Audits.

Clients go after search terms with high amounts of exact match in order to hit goals and avoid wasting money on high-ranking keywords.

As a result, they’re missing out on conversions.

But, as soon as you lean more toward Phrase or Broad Match keywords, your ads are triggered by search queries that are less in line with the user's intent, thus, wasting spend.

This automated tool allows us to save ad spend, increase conversions, and find additional opportunities, all while reducing the time it takes for account teams to run manual search query analyses.

Implementing negative keywords at scale across a search account can save our clients some serious money over time.

For example, if a client was spending $3K / quarter in search terms that never converted, negating these terms would save that client $12K / year.

Finding this wasted spend decreases costs without hurting conversion volume, since these negative keywords have never produced conversions to begin with.

That extra $12,000 saved per year could be used for things like:

Continuing from the above example, the client now has an extra $12K a year back in their marketing budget, and decides to reinvest that budget more efficiently into their existing campaigns.

Let’s break that down further.

When negating irrelevant and/or poorly performing keywords in an account, it prevents a client’s ads from showing for queries containing those keywords, and allows that client’s ads to show for even more relevant queries than before.

Say this client has a campaign that is budget capped, in which the campaign is missing out on potentially relevant and valuable queries that could drive conversions. Now the client can re-invest that $12K here on more relevant search terms.

The result is an increase in conversion volume, and a decrease in CPA.

By reinvesting savings found from Saving Ben Pro, a client can increase the conversion impact of their existing budget-capped campaigns.

This increase in conversion metrics can be especially prevalent in branded campaigns. The negation of irrelevant keywords allows these campaigns to serve to more users with a significantly higher level of intent than those in non-brand campaigns.

1- 2 hours is how long it takes to pull a standard Search Query Report and dig through hundreds to thousands of rows of data.

10 minutes is how long it takes to run Saving Ben Pro and review recommended negative keywords.

Similarly to how the tool saves clients money, it also saves time for Seer account teams.

Saving Ben Pro combs through millions of data points each night, essentially completing most of the work by the time our team wakes up. Wouldn’t you like to do an analysis in your sleep?!

With these extra two to four hours a month, an account team can reinvest their efforts in other optimizations to improve client performance. This is helping teams to accomplish larger tasks that would otherwise be delayed due to time constraints.

How About Some Examples?

So now you’re thinking, “Well, Saving Ben Pro sounds cool, but does it actually work?” You tell us…

As we’ve been rolling out the tool across Seer, client teams have been utilizing Saving Ben Pro weekly to find wasted spend.

To measure the long-term impact, we have a running dashboard that measures the savings at a 1 and 3 year scale:

As mentioned, the dashboard is running, so this number continuously grows as our teams utilize the tool to identify more and more irrelevant keywords for our clients.

One particular client is projecting to have $16.6k in yearly savings after looking at only two months of data from Saving Ben Pro. While the percentage of total savings to spend doesn’t seem significant at around 1%, this equated to roughly 75 incremental conversions when these savings were reinvested.

These are conversions that the client would not have had the budget to capture without the improved efficiency of the Saving Ben Pro negative keyword additions.

So let’s take this one-step further… let’s say that client’s conversion is worth $500 each.

It’s not just about saving $16,600 - it’s about the ripple effect of then investing that properly and turning it into $37,500! Then continuing to invest that revenue and growing that number further. There’s a multiplier effect at play when you can save and re-invest at scale.

In ~10 minutes over the span of two months, the Seer team was able to generate 75 additional yearly conversions for this client with the money saved from irrelevant queries.

Another client saw conversion rate increase by 29% month over month after adding negative keyword recommendations from the SB Pro tool.

With only a few other minor optimizations made during that month, the SB Pro negatives had a significant impact on this increase in conversion rate.

The total savings for this client came out to be even greater at around $17.7k per year which equated to over 9% of monthly spend.

In total, this client could potentially see 93 additional conversions as a result of 5 minutes of work using Saving Benjamin Pro.

We experienced a 29% increase in MoM conversions, with a -22% lower avg. CPC after negating irrelevant search traffic identified by Saving Ben Pro from another client.

Save Some Benjamins On Us With Saving Ben Lite

Our team is constantly evolving Saving Benjamin Pro to further enhance speed and efficiency, which allows us to keep saving at scale for our clients!

But this is also about advancing our industry. Our industry helps curate searches, and our goal is to make that experience as easy as possible. We don’t want users clicking on irrelevant ads -- it doesn’t help them!

Keep Up With The Innovation