It’s been three months since the Accelerated Mobile Pages Project officially launched in the mobile SERPs. At Seer, we were dying to find out how this Google update would impact how users interacted with all websites - not just online news publications. So, we conducted a test.

We conducted an analysis of almost 800 live AMP articles in the carousel. The result? 5 solid about AMP and what it means for marketers’ content. In this post, I’ll share our findings and how you can potentially apply AMP to your own website in the future.

Hypothesis: Originally, Google created The Accelerated Mobile Pages Project for "publishers.” When Google first rolled out the release, we assumed that only news publishers like and Los Angeles Times, could bear the name, “publisher.” We predicted that only top notch news publishers would rank in the AMP carousel.

Method: We conducted 80 Google searches, with 10 different queries for each news genre:

From these searches, 760 AMP articles from 166 different websites or “publishers” were ranking. Of the 166 websites, they had at least one AMP article ranking for the queries that we searched for. Unsurprisingly, we found that national publications with a large following appeared more frequently in the AMP rankings. our test, here is the list of the top 20 websites ranking in the AMP carousel: 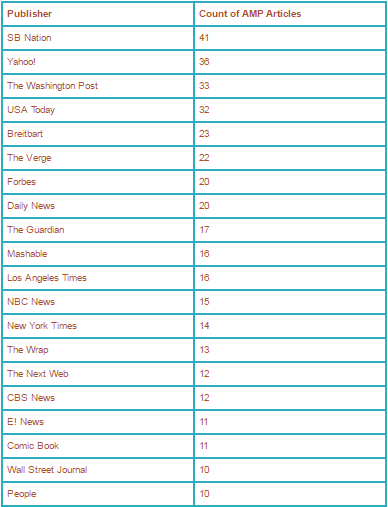 Of the top five publishers, SB Nation, Yahoo, The Washington Post, USA Today, and Breitbart ranked for 22% of queries. 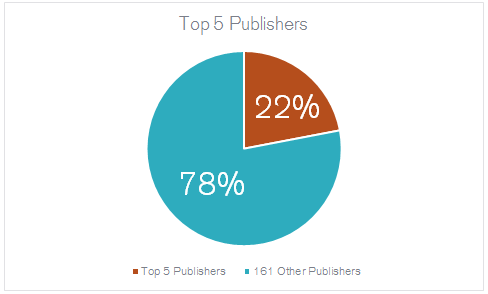 As a whole, the top 20 publishers were ranking for about 51% of the AMP rankings. This indicates that about 12% of the 166 publishers are receiving 50% of the rankings in AMP. 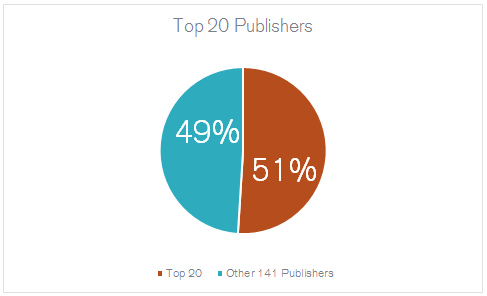 Want more data-driven industry search updates? Sign up to get em' straight to your inbox.

So what does this AMP data mean for marketers?

On the surface of this test, it looks like AMP is mainly beneficial for top news publishers. Google’s mission is to provide the best results to users; it makes sense that the top publishers would be more trusted by Google and rank - just like in the normal organic results.

So why should brands that aren’t news publishers be excited about AMP? Yes, the big giants, Washington Post and Huffington Post are going to win in the AMP rankings a large majority of the time. However, if you can find a niche, then your brand has a shot of appearing in the AMP carousel.

Example One: When we searched for “guns”, here’s what the AMP carousel surfaced: 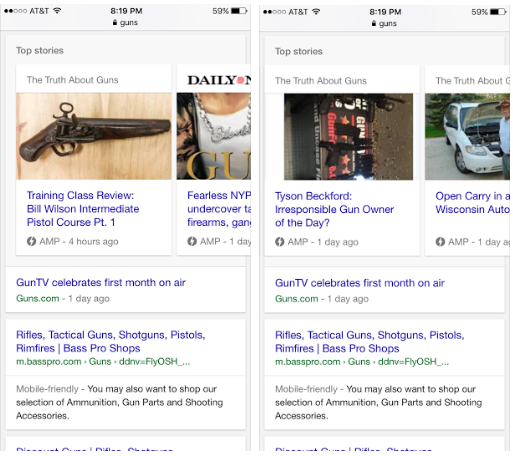 The Truth About Guns, a smaller , had three out of ten ranking AMP articles for the query “guns”. Although The Truth About Guns doesn't have the credibility of USA Today, this blog is dominant in its own niche, gun ethics. Google clearly perceives that this blog has valuable information on gun related queries. Additionally of the ranking AMP articles for “guns,” only a select few were on timely news topics, most of the ranking articles, such as the first article on pistol course, covered evergreen topics.

Example Two: SB Nation, a rising sports media website, dominated and claimed 40% of the AMP results for sports news queries. This website doesn't have the legacy of sports publishers, Yahoo or Sports Illustrated, yet Google understands that this publication contains highly relevant and up-to-date information making it a perfect match for AMP. 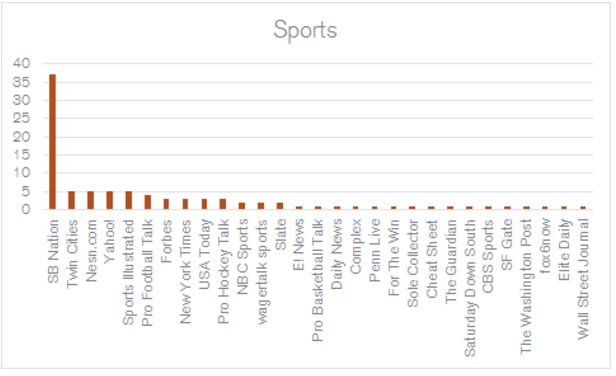 Additionally, Built Visible, a digital marketing agency, had 6 AMP articles drive organic traffic. One AMP article, How Google Works, was featured the carousel for the keyword “google.” It received a total of 168,442 impressions and 294 clicks. That’s a staggering amount of visibility! Google recognized Built Visible as a credible source for Google related industry updates.

Example Three:  When we searched for the query “SEO”, here’s what we saw: 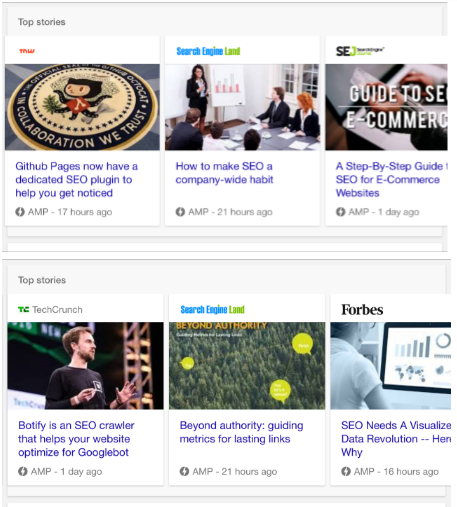 Pay attention to the articles, “How to make SEO a company-wide habit” and “Beyond Authority: Guiding Metrics for Lasting Links.” Those topics are evergreen and have nothing to do with timely news or current events.

A similar occurrence appeared when we searched for “graduation”: 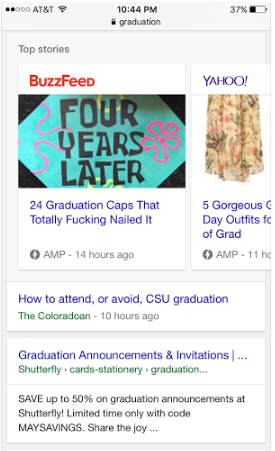 occasionally produces timely news articles, but for this search query, a Buzzfeed article topic is appearing that could be reused every year during graduation months.

Google is surfacing an AMP carousel because it’s around a large seasonal event, graduation. We infer that Google is showing AMP carousels for queries that have a “feel” or seasonal aspect. Although graduation will never be a true news topic as it occurs every year, its’ search volume spikes at a certain time - thus indicating to Google that users have more interest in that topic once a year, even if it remains the same year after year.

So how does this apply to marketers? It means that brands’ who publish content need to establish themselves as the authoritative source in a specific content vertical and optimize their content for relevant seasonal events to drive additional traffic. Unless you work for the New York Times, if you don’t have a unique expertise on a certain topic, Google most likely won’t rank your AMP articles.

If you’re a local news publisher or local authority on a certain topic, you have an advantage.

When searching for “San Francisco”, this SERP appeared: 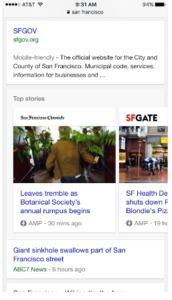 All of the AMP results included local San Francisco publications. Go ahead and try it for your own city!

If you look for something in Los Angeles, more LA Times results will show up. Same applies searching for “New York,” more NY Times articles will dominate the carousel.

From this, we can see that Google is placing an emphasis on publishers’ local specialty. The LA Times is naturally going to have more reputable and frequent information about LA than other publishers.

searching for “P ” in Philadelphia, local news publications in the AMP results. 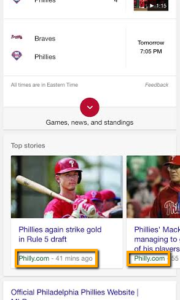 If you can apply any locality to your content, we recommend that you do so to provide a better experience for users and to help Google understand your niche authority in a certain region.

When we were looking at the query “machine learning,” Forbes’ AMP article, three ways to become a learning machine appeared: 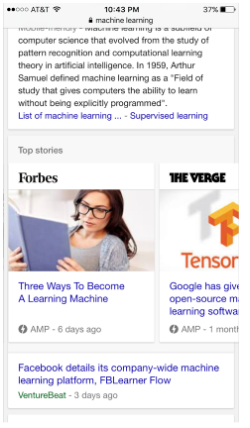 I was searching for articles about machine learning; however a post with the right keywords of “machine” & “learning" appeared, instead of a contextually relevant article.

This reveals that Google still relies heavily on keyword placement when choosing rankings for AMP. Keyword research is still a crucial element and optimizing for keywords in your AMP articles is a must. Don’t forget about the fundamental SEO tactics!

Older Articles Have a Chance to Rank

At the start of this test, we had heard that articles older than three days would not show up in the AMP carousels.

In the screenshot below, for the same query, “machine learning” we saw that published 6 days ago or even a month ago were in the number one and two spots. This was much longer than we previously expected. 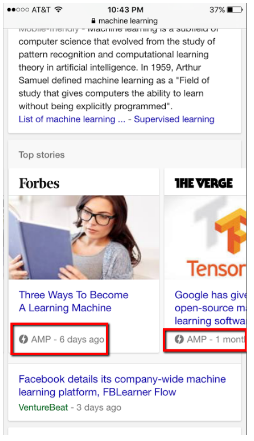 The good news about this is that there is a wider window for your AMP articles to appear. So, if you’re testing AMP and publish an article that doesn’t show in the carousel immediately, watch it over the next month. There’s still a chance that you might see some traffic later on.

Long tail queries do not pull many AMP carousels. The way we tested this was by looking at a head term, scanned the AMP articles it pulled up, and then searched for longer phrases used in the articles. 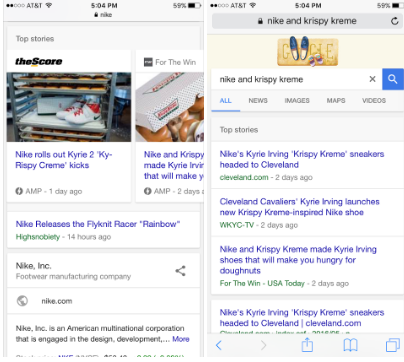 The top stories section the long tail query showed that Google recognized the connection to the head term, but it wasn’t able to produce an AMP carousel.

It’s possible that since Google wants quality information and non-head terms don’t produce enough AMP content to place in the carousel. Although it’s difficult for Google to produce steady, consistent AMP results for long tail queries now, we predict that Google will continue to roll AMP out for more long tail queries over time. Be prepared for the future - start testing out AMP for your content now!

What are your thoughts on AMP? Let us know what you think and if you’ve seen anything interesting happening with AMP for your website content!

Want to conquer mobile search marketing for your brand? Join us June 9th for Seer's Philadelphia Event, "Are you a MoLo SlowMo? Getting Mobile & Local Marketing Right" to learn from mobile marketing experts who know what it takes to create a scalable, long-lasting mobile plan.