Tearing Up Your 2020 Plan – Part III: Estimating Demand for Your Business During COVID-19

This is a strategy from Tearing Up Your 2020 Plan:

How Marketers Can Estimate Demand

As marketers, we want to understand and estimate demand in three periods, alright? 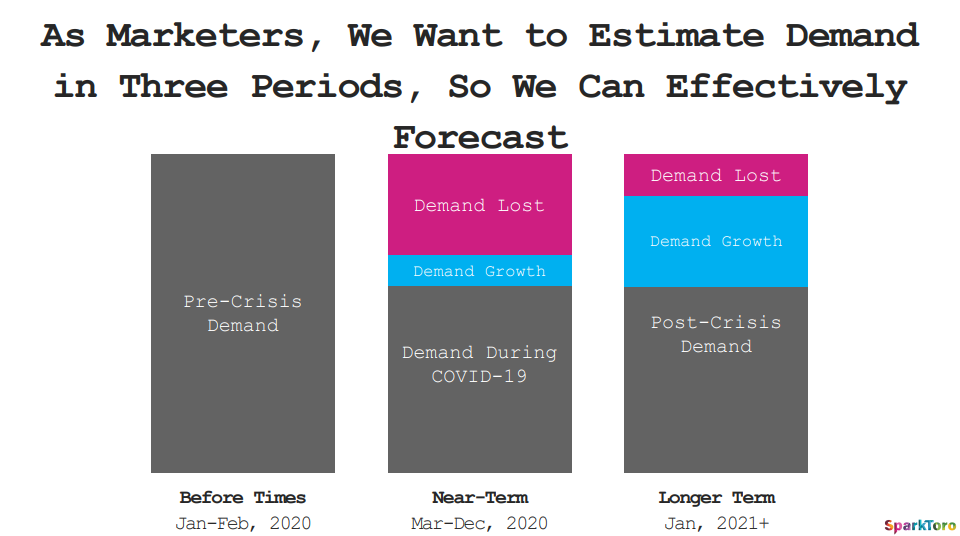 What Happens in the Near-Term?

We look at what January and February look like for our businesses-- Wil showed you his for Seer [before it all happened] and then maybe the next six to nine months -- say March/April to about December/end of year -- [and yes] there might be a significant amount of demand lost.

If you're in an industry that sort of benefits from quarantine restrictions, those kinds of things, there will be some demand growth. And then post-crisis demand will look different as well.

Things will look even worse for me than they look across the board.

Likewise, I don't want to cut so deep that I remove the potential for growth during the near term or longer term periods.

In this, you know, really, really tough economic time, your organization probably falls into one of these three buckets, right?

For Zencastor, they're looking at podcast consumption being down a bit because people aren't driving to work. But they're also looking at more podcasts starting because a lot of people are starting their own podcast now that they have new fancy recording equipment at home that they've purchased.

For my company, SparkToro, I don't know whether we're directly harmed or directly benefiting. We're sort of indirectly affected.

And in these buckets, there's different things that we can do.

So I pulled some examples: 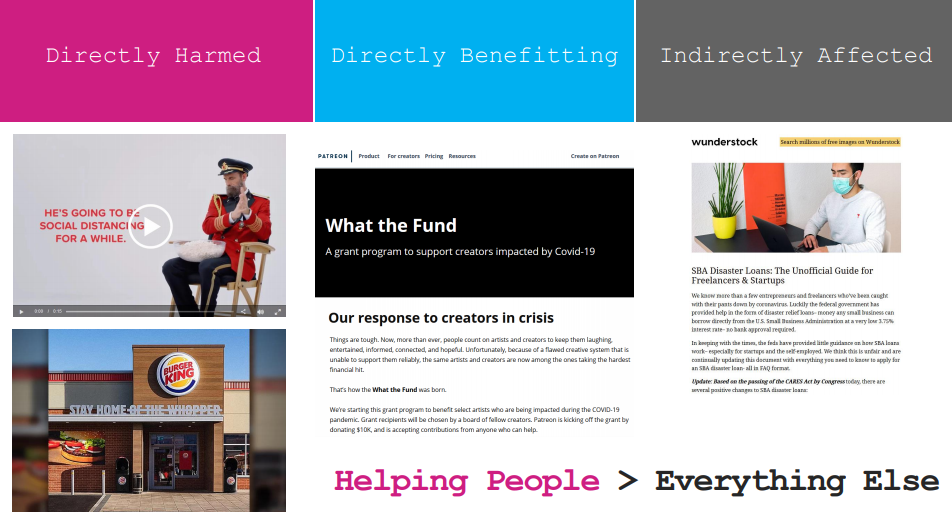 Directly harmed folks generally speaking, I think that some of the smartest ones have been building brand awareness and investing in creating future demand.

I'll actually show a few more examples in the travel space, specifically where folks are making investments for the future, predicting that that pent up demand will release at some point. And if they play their cards right and capture consumer interest, they'll have it in the future.

You could be directly benefiting, in which case I think the absolute right thing to do is to be generous with that benefit.

So I think, you know, Patreon, I don't know if you've seen folks like Gum Road and Shopify. Shopify did this amazing thing where they created a huge fund for creators and small businesses up in Canada, that they're investing almost like a mini government entity, right? Making not just loans, but grants, paychecks on.

The same thing for Wonderstock, helping other people because they are indirectly affected. So they just look for ways to be helpful -- I think that that's a great thing to do.

That's what we're trying to do at SparkToro. I think that's what a lot of businesses are doing and I'll show you why this is true.

Helping people over everything else is not just the right thing to do -- it's also what is resonating most out there.

I think we can understand the scenario that we're gonna be in in Three Waves:

There's sort of this March and April period where our attention is on nothing but, you know, the disease and our health and worrying about family and all that kind of stuff. I actually feel like even right now, we're coming out of that a little bit. Some people are coming out of it at least make twenty, twenty two.

I think probably next year there'll be this transition to life online in a recession climate, hopefully not a depression, but possibly too.

Then from March or perhaps later onward kind of a period when we are anticipating or getting a vaccine and things are returning to a new normal. That's that third period.

Up Next: Part IV: What Google Knows vs What the Marketer Shows

Sign up for our newsletter below. You’ll also receive information about upcoming events & webinars!