This post was originally published in May 2017 and last updated in March 2022.

In May 2017, Google had an exclusive beta kept under wraps for select accounts at Seer. This once beta is Maximize Conversions and has turned into a commonly used and trusted bid strategy for PPC advertisers.

Since then, it has become one of the many automation tactics we use across Paid accounts at Seer as it has been tested countless times and has consistently outperformed its counterparts (examples of experiments below).

Like most once-betas, Google has only continued to improve this strategy. Most recently, Google rolled out optional fields in Search campaigns to optimize the same way it would for Target CPA. Max Conversions can now set a CPA target and will work as the standalone tCPA does.

Similarly, the Maximize Conversion Value strategy now has the option to add a Target ROAS and behaves how the standalone tROAS behaves. 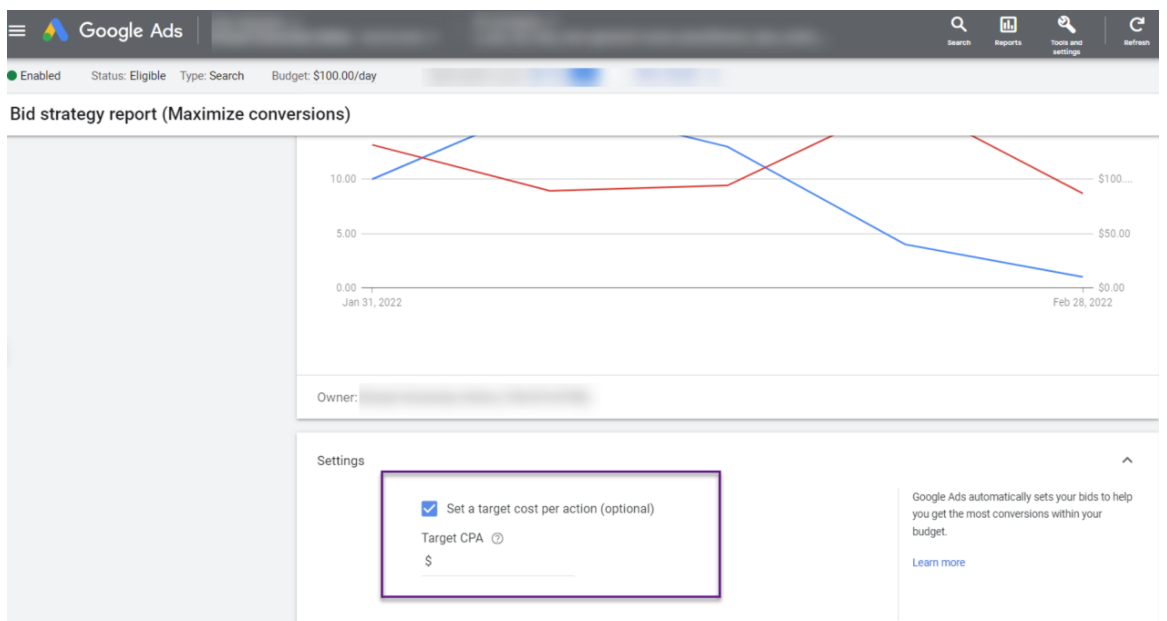 Maximize conversions on Google Ads automatically sets bids to get the most possible conversions for your daily allotted budget. The max conversions strategy is one of many automated bidding strategies offered in Google Ads today.

Depending on your return on ad spend (ROAS) or cost per acquisition (CPA) goals, Maximize Conversions can be a great strategy to obtain the highest number of conversions while efficiently spending your daily budget in its entirety.

With the idea of spending your entire daily budget within a campaign, this bidding strategy can be wildly effective if you operate on a “use it or lose it” advertising budget as Google will leverage every opportunity to spend that daily budget to drive as many conversions as possible.

In order to leverage the Maximize Conversions strategy, be sure that you’re already tracking conversions, especially conversions that closely align with your business goals.

The maximize conversions beta was initially only available to run as a 4-week experiment within a select number of campaigns that Google chose based on a specific set of criteria.

When Google first introduced this exclusive beta to only four accounts at Seer, we asked what factors they were using to determine which campaigns could test the beta. There were two main pieces of criteria that we could get our hands on:

Since being offered this beta, Seer was able to run over 10 experiments within various industries. Below we walk through lessons learned with recommendations for when to test the maximize conversions bidding strategy in your own accounts.

Lesson #1: It takes about 2 weeks for Google to learn how to optimize the campaign.

For several of the campaigns that we ran this test with, we saw performance decline slightly in those first two weeks then head up into the right for the remaining two.

Below is an example of one B2C client that saw performance decline after the first two weeks but then pick back up the last two weeks.

Lesson #2: This strategy will not work for all campaigns in all industries.

At Seer, we ran 10+ tests and of the test, about 15% of the time, the max conversions bidding experiment performed worse than the control, which was the campaign original bidding strategy.

Below is an example from one of our B2C clients where the experiment performed worse than the control:

No one industry performed better than another. Seer was able to test this for education, a medical device company, healthcare, and a decking material company. Each of these industries saw at least one very successful test with this automated bidding strategy.