Read the Transcript of Episode 19 on "Black Friday / Cyber Monday":

Hey there everyone, I'm Forrest Schaffer, PPC Account Manager here at Seer Interactive, and I'm back for another Wasteful Wednesday.

If you haven't already guessed it, that set of keywords is BFCM, which stands for Black Friday / Cyber Monday, so let's dive into it right now, back at my computer.

Keyword of the Week: "BFCM"

Frank Adams is not sending anyone to a specific landing page. So that's going to lead to a poor user experience, their ad copy doesn't talk about any type of sales either.

Then we scroll down a little bit and see that Blue Nile is really kind of hitting the nail on the head here.

We see that they're using Black Friday related ad copy [with the coupon code], which is important to see.

Then some of these other brands down here are just not getting the memo., so they're better off negating BFCM in this example.

They have ad copy that's actually relevant to what the user's going to be searching for, and when we hover over this link, we see that their landing page actually is for BFCM deals. It looks like they're actually even testing with a V1 and V2 for maybe a little A/B testing. James Allen, you're doing it right!

As we scroll down, though, we start seeing some issues with these other advertisers who are just not aligning their ads properly with what a user is searching for. 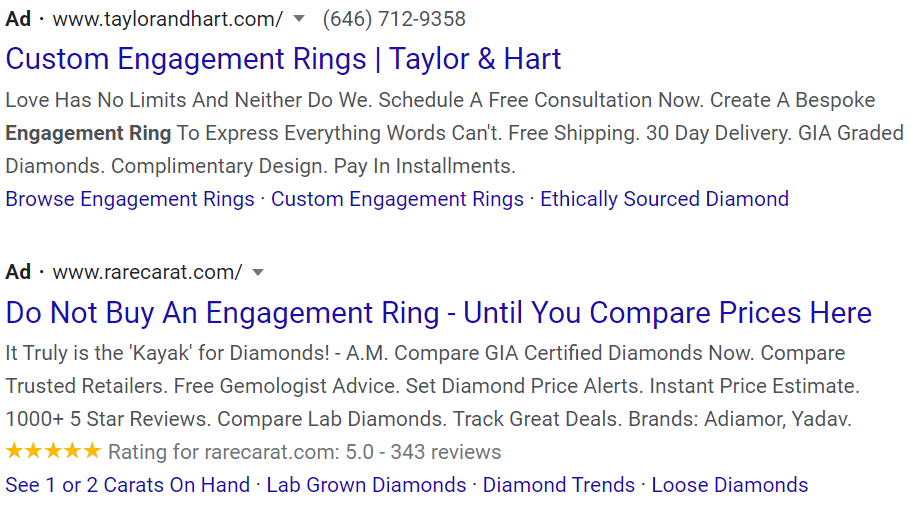 [Irrelevant ad copy] is going to lead to a poor user experience where someone's going to click on your ad and then bounce, but you're still gonna get charged the click.

As I mentioned in the intro, a lot of different people are going to use pretty much the same set of keywords, but on a number of different verticals, so I wanted to do this example with office furniture.

I think that this is an area where a lot of people are searching for deals because really nice desks and really nice chairs are super expensive and people are always going to be looking for a deal here.

So as we see pretty much...

...none of these businesses are hitting the mark in terms of having this, BFCM copy even hovering over these, none of the links are going to a particular landing page.

This one...maybe is relevant where it talks about cutting your budget by 50%, but really not sales focused like a person is going to be expecting. Then the landing pages are not going to talk to any of those deals.

So I have a feeling, a lot of these folks are going to be spending plenty of money on keywords like this, and I'm not sure that the ROI is going to be there to follow.

Then just a quick last example here for couches -- I don't need a couch right now, but if I needed a couch, this was probably exactly what I'd search.

As you can see these two examples here...

...not really hitting the mark in terms of ad copy or landing pages, so they might see reduced ROI on the campaigns here, which is something that we really tend to watch out for here at Seer.

Alright everybody, thanks so much for tuning into this week's episode of Wasteful Wednesday. Hope you got some benefit out of it, definitely go ahead and make sure you're either negating Back Friday / Cyber Monday, BFCM, pretty much any of those variations.

💡 Even misspellings are a good thing to include there.

If you're NOT gonna negate those keywords, you want to make sure you send people to an landing page that's actually going to be relevant to what they're searching for in the moment.

It sucks when people are searching, they have certain intent and they think they're going to get a deal, and then they pull up on your landing page after they already click on your ad, and it's not relevant, nothing's on sale, right?

That's a really poor user experience and people are probably going to bounce.

And that's what I'm going to do too. I'll see you guys later! Let us know what you thought of this episode on social, or in the comments below.