As we all know, the Panda came roaring back to life this week, doling out panda-gifts to some and panda-monium to others. There were some winners and losers in this round, with eBay getting smashed and small business getting a break, but I found a rather surprising hit that no one is talking about. In fact, this came several days after the "official" Panda update, so this might be a bit more like Payday Loans, or a Panda 4.1.

It looks like Press Release agencies took a severe hit.

On May 27th, PRWeb.com lost more than half of their traffic overnight. They dropped out of the first 20 Google results for more than 8000 keywords. According to SEMrush data, these ranking losses have cost prweb.com nearly a half-million daily sessions.

Google dropped the rankings on the millions of individual press release pages. They simply followed through with what they've been hinting at for a while, though just in a way that I don't think many were expecting. Google has been saying for more than a year that links in press releases shouldn't carry any value. In fact, it was less than a year ago that Google updated their webmaster guidelines to specifically call out excessive anchor text and links within press releases.

As you can see in the comparison from April 27th SERPs to May 27th SERPs, PRWeb’s press release for AHRN used to rank position five for the term “AHRN”, but now it’s gone. 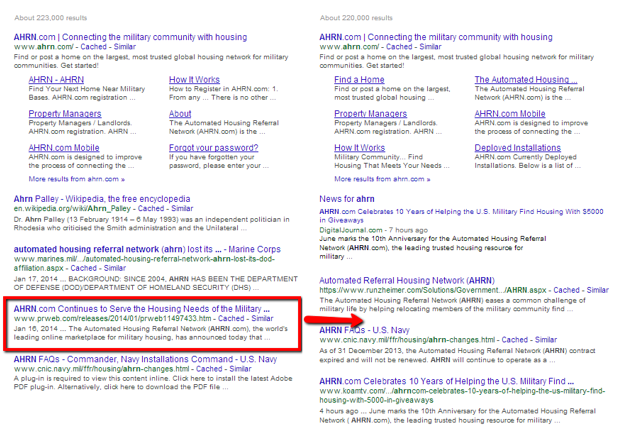 It’s the same across the board. Individual press releases have lost nearly all rankings in search.

It makes a lot of sense. Google wants to give users a great experience and return the most relevant results. If you're searching for "protein shake diet plan", are you looking for a press release? PRWeb used to rank #2 for the term:

Personally, I've searched for protein shake diet plans before. I was looking for a diet plan. I wanted to know about how they worked, what they tasted like, and how much they cost. Google knows this, and in the interests of providing the best results, simply removed the obviously irrelevant result.

Still don't believe me? Here's the link they removed. This press release is not only spammy, but it goes even further into spam-land when you try to bounce back to the SERP. 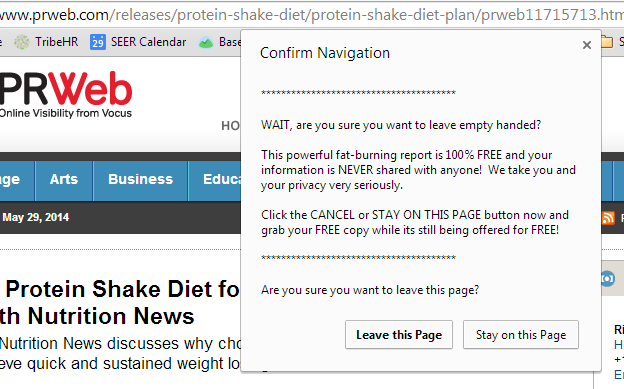 What Does This Mean for Me?

Hopefully, you’ve been following Google’s webmaster guidelines. Remember what press releases are for: releasing new, relevant information to the press. They’re not there to be used as a shady link building tactic. If you've been using press releases in the way that they were intended, you should be fine.

The way to build a lasting online presence is to build a real online presence. Remember, Google is not out to get you. At the end of the day, Google is a business. Their business is built on search user loyalty, and search user loyalty is achieved by returning the best, most relevant results possible. That’s why the best strategy for SEO has always been simple – be the best, most relevant result.

Have you noticed an impact anywhere else?

It looks like there's guilt by association, as well. Bloomberg, who partners with the press release agencies to disseminate releases, also took a huge hit.

Update 2: Press Releases Were Around Before SEO: Adam Melson

I wanted to jump into Sean's update to look at this from a holistic marketing point of view. There's been a lot of comments across the industry about press release becoming irrelevant . While press releases have been a facilitator of spam, they have been around for longer than the SEO industry. Distributing press to be picked up by the public and by journalists is still extremely necessary. Finding the best way to filter out spam is an area some of these companies could look to improve upon, but the days of the press release for legitimate reasons, earnings reports, technology innovations, acquisitions, etc, are still very alive & well.

Looking deeper at the data, this concept is really reinforced. If we take a look at some PRWeb lost rankings, we can see that they were super spammy press releases.

Should a PRWeb press release really rank #1 for Best Anti Inflammatory Supplements? It used to, with a super spammy release. But no more. Just take a look at the below choice keywords that PRWeb once ranked for with individual press releases, but just lost. What do you think... was Google right? 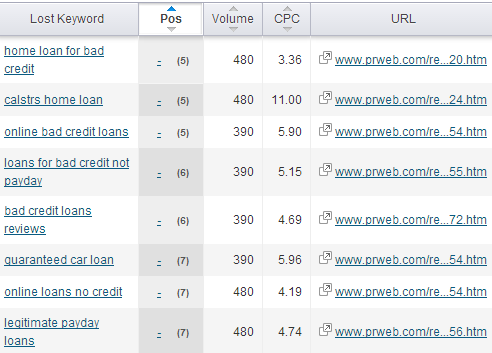 Are Affiliate Links Bad for SEO?