How to Find BERT Keywords

Google’s BERT update, which was released in October 2019, was one of the most significant algorithm updates in recent years. However, traditional SERP tracking tools showed only minor fluctuations after the update, and many webmasters saw no noticeable change in their core keyword rankings.

So, what impact did BERT have?

Finding the impact from BERT starts with understanding what was updated within the Google search algorithm and how it impacts the results for various queries. Then, once you know the types of queries affected, you can look into your search performance data to compare the terms your content ranked for before and after the BERT update, allowing you to identify new ranking keywords that Google now finds relevant to your content.

In this blog, I’ll briefly explain what the BERT update was and the parts of search that were impacted by the update. Then, I’ll give you a simple, step-by-step process to identify new search queries you rank for after BERT as well as those you lost after BERT. I’ll also discuss what the next steps could look like for optimizing, monitoring, and reporting your website’s organic search performance following the BERT update.

Without further ado, let’s dive in!

What Exactly Was the BERT Update?

Google began rolling out BERT on October 21, 2019 for English-language queries, with plans to expand to other languages over time. When it launched, Google told webmasters that the BERT update was the most significant update to its search algorithm since RankBrain. But, what did this update address, and how is it different than other search algorithm updates?

BERT stands for Bidirectional Encoder Representations from Transformers. OK, so what does that mean? To answer this, we turn to the Google Blog post titled Understanding searches better than ever before by Pandu Nayak, Google Fellow and Vice President of Search.

This piece is pretty technical and linguistics-heavy, but to simplify it into three main points:

So, in short, Google is getting better at understanding content. It’s improved its natural-language processing abilities to better understand the content and natural language search queries to deliver search results that are better aligned with search intent.

Why Did I Not See Major Ranking Changes After BERT?

When it first rolled out, many webmasters expected to see major shifts in rankings and other organic search metrics. But, for an update this massive, why were SERP tracking tools not picking up major ranking changes? If this was an update which fundamentally changed the way Google interprets language and understands meaning from text, how is it that rankings could remain largely intact pre- and post-BERT?

I believe there are two main reasons why BERT has flown under-the-radar:

But, just because there weren’t large-scale keyword ranking fluctuations after the update doesn't mean there isn’t tremendous value to show from this update—you just need to know where to look.

How to Find BERT Keywords

To find new keywords you rank for after BERT and those you stopped ranking for after the update, you’ll need to head over to Google Search Console. You can attempt this same process with SERP tracking tools, but as we mentioned above, they won’t be nearly as comprehensive as the GSC Search Query Report.

We’re looking for search queries that we didn’t rank for before BERT (0 impressions before in GSC) that now rank and are earning impressions after BERT.

Here’s how to do this:

If you’re unfamiliar with Google Search Console, it’s a tool that allows webmasters to monitor the indexability of a site and optimize for organic search performance. It tells you everything from issues and errors that impact crawling and indexing to the actual search queries that a website shows for in Google’s organic search results.

Unfortunately, if you didn’t have Google Search Console set up on your domain prior to the update, you won’t be able to retroactively gather data to compare. Instead, you’ll have to apply this process to other organic data sources, like SEMrush or a keyword tracking tool of your choice.

Step 2: Go to the Search Results Report (Under Performance) 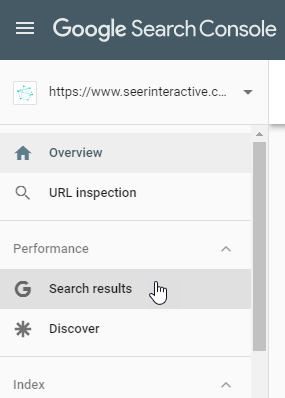 Step 3: Compare Date Ranges Before and After BERT Rolled Out

To find new keywords gained (and previously-ranking keywords you lost) after the BERT update, you’ll need to compare date ranges before and after BERT. When I do this analysis, I exclude the week the update rolled out to avoid overlap, as there was no clear-cut moment the update launched.

We want a clear picture of queries that had 0 impressions before BERT that now rank or ones with 0 impressions after which we previously ranked for.

The wider your “After” date range, the more data you’ll have to find new keywords you’ve gained. Remember, this update largely affected long-tail, semantic queries that have inherently lower search volume. For this reason, you’ll want to choose the widest date ranges you can. 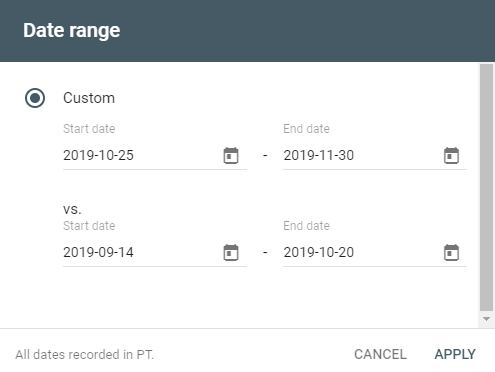 If you’re concerned about excluding a week’s worth of data, just remember that the value is in the new keywords, their rankings and search volume, not the total impressions and clicks earned since the update. If these numbers are important to you, I recommend excluding that week in your initial research, then searching these queries specifically using the query filter to find your total clicks and impressions from these keywords since BERT.

Step 4: Sort Your “Before” Impressions Low-to-High

You’ll then want to sort your impressions in the timeframe before BERT from low to high. This will show you all of the search queries that were not showing in search results before BERT that now have organic visibility.

Once you have your list of search queries you recently earned visibility for after BERT, the next step is to apply what we know about the algorithm update to find ones that apply. Look for long-tail, semantic queries—ones that include words like “to,” “for,” or “in,” which alter the meaning of the phrase.

Please Note: This list is not going to be only keywords ranking because of BERT. You’ll have to consider recently-published pieces that earned visibility around that time that could be included in this data.

To find new SERP features you’ve gained with the update, I recommend one of the following options:

How to Use this Information to “Optimize for BERT”

While Google has said that BERT isn’t something you can optimize for like you can with other updates, there are insights you can take away from this algorithm update to influence your SEO efforts.

We know that the BERT update changed Google’s ability to process language, which, for SEO, means that Google has a better understanding of what your content is about and the questions it answers (or doesn’t answer). The results from this update include:

To “optimize” for BERT, I recommend studying your dataset of gained and lost keywords and doing traditional content optimizations to improve or regain rankings for these terms.

1. Regain Keywords You Lost After BERT

One way to “optimize for BERT” is to identify keywords you lost following the BERT update and address the content on your page to regain them.

TO BE CLEAR—I’m not saying to stuff keywords into your pages to re-rank for keywords.

The BERT update helps Google understand semantics (the meaning behind words and phrases) better. This means if you used to rank for a long-tail phrase but lost it after BERT, it’s likely because the page was relevant to the keywords within the query but didn’t actually match the intent behind the search.

If your page is relevant to the topic but still lost the keyword after BERT, it’s an opportunity to improve your page content to better match what searchers are looking for.

2. Optimize for Gained Keywords as You Would Any Other

Just like SEOs do with other valuable keywords ranking a bit too low to earn clicks, you can optimize your “striking distance” keywords that you gained after the BERT update. Again, I’m not saying to try to “hack the system” to rank for these keywords, but instead, compare your pages to competitors who also rank for these keywords and see how you can use these insights to make your content more valuable to users.

If you’re looking for innovative ways to show value to your clients or track your website's performance, or if you want to improve your digital marketing chops and learn from the super-smart people at Seer, subscribe to the Seer blog below!