Why Beyonce is the Queen of SEO

When you think of authority and influence in SEO, who comes to mind? Rand Fishkin? Matt Cutts? Beyoncé?

Those first two are pretty typical responses. SEO consultants live and die by the information they share and rightfully so - they’re two of the top experts in the field. The truth remains however, that Beyoncé wields more SEO power than either of them. Beyoncé could be the foremost SEO influencer in the world.  Say What?

On Saturday April 23rd, Beyoncé dropped her newest album, Lemonade. It’s typical Beyoncé: sexy but strong, entertaining but empowering. The title is inspired by a quote from husband Jay-Z’s grandmother at her 90th birthday in 2015:

"I had my ups and downs, but I always found the inner strength to pull myself up. I was served lemons, but I made lemonade."

The album title is a metaphor for life, but is quite literally named after the delicious summer beverage. Up until recently, the SERPs for the keyword “lemonade” were mostly related to that beverage too. Then Beyoncé came along, named her album Lemonade, and changed everything. Let’s take a look how the search engine results page for the head term “lemonade” have changed over the last month since the Album's release.

SEMrush offers historical ranking data, so we can get an idea of what the SERPs used to look like. For some reason SEMrush is caching local results from Southern California, but that’s the best we can do in the pre- Beyoncé Lemonade era.

The results here are varied and address queries of very different intent.

Here’s what the SERP looked like 5 days after the album launch: 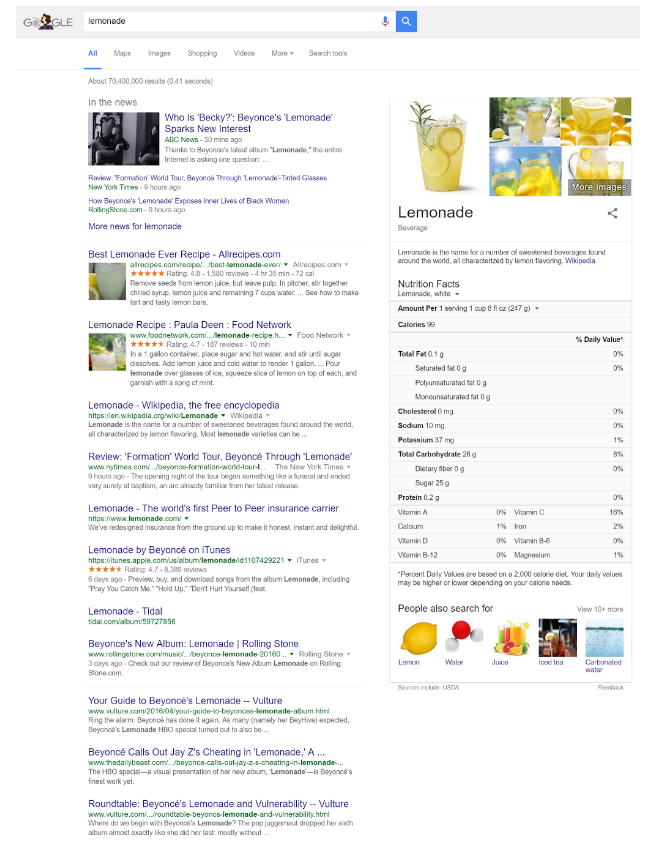 Look at the SERPs now:

Noticeably absent from these results: Beyoncé’s website and a Wikipedia page for the album. 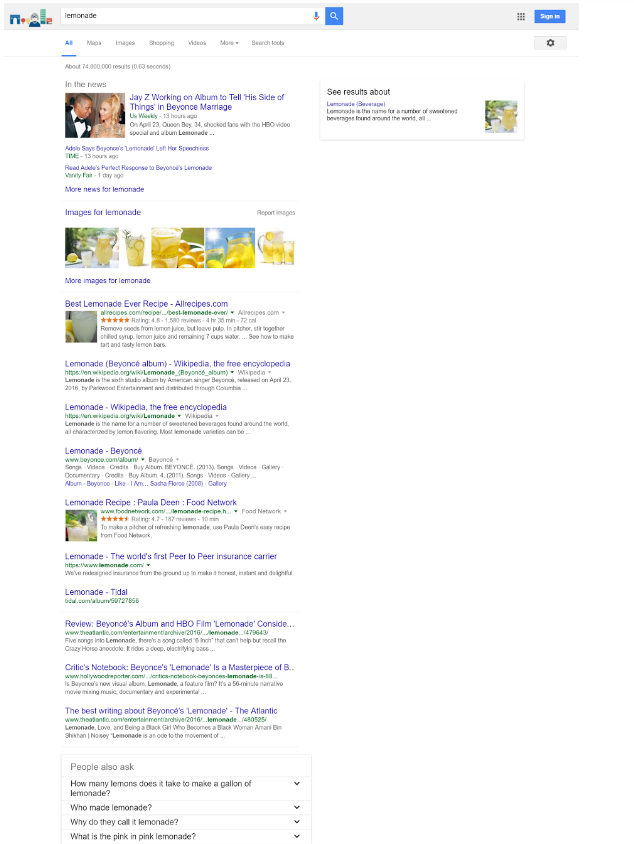 The Wikipedia page for the album has entered the SERP, as well as Beyoncé's own website. We’re seeing a shift towards Beyoncé-dominated results, but there’s still a fair bit of diversity. Google is still showing a wide variety of results related to the drink including recipes, images, and a knowledge graph, albeit a much smaller one. 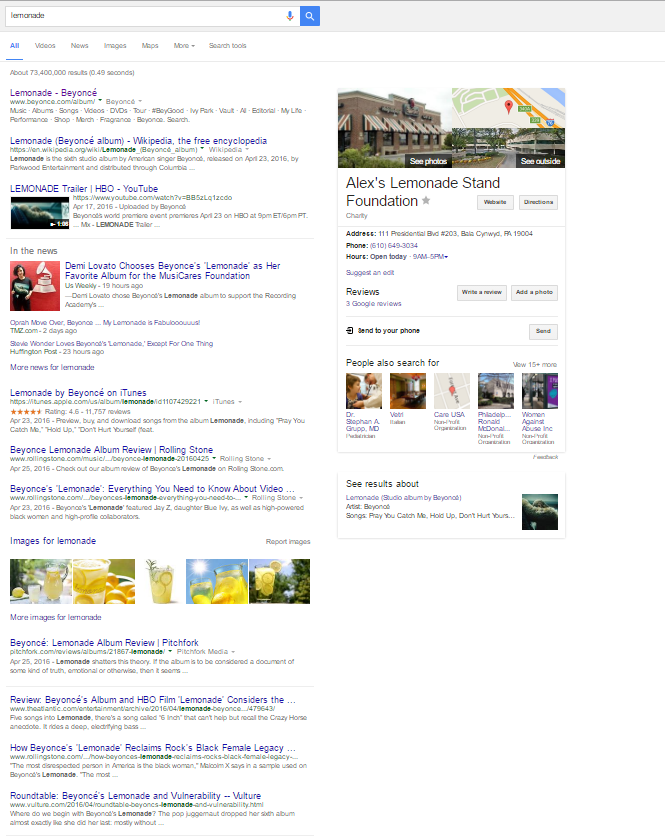 Ten out of ten organic results are now related to the Beyoncé album, expect the image results which still show glasses of lemonade. The SERP includes links to her album on iTunes, the wikipedia page, and recent news stories on the topic.

In a month, the search results for this head term have completely changed. Sympathies go out to the sites that used to rank on page one. While the search intent is drastically different behind the album and the drink, websites banking on a high ranking for “lemonade” the drink have certainly seen a traffic loss as a result of the sudden and unexpected diversity of these search results.

Think about this for a minute:

“Beyoncé is so influential she could have named her newest album ANYTHING and it would have commanded Google’s first three pages.”

Beyoncé and her associated web properties (iTunes, Tidal, etc.) naturally earn the highest-quality links available. The New York Times, Rolling Stone, Vulture, ABC News, The Daily Beast, People, Huffington Post - think of any major media outlet, and chances are they’ve linked to one or more of the pages appearing in the top of this SERP.

Links are certainly still important (there’s no better example of this than Beyonce.com/album which has virtually no text on the page and still ranks number one organically), but we know there are other factors that contribute to rankings. Engagement in the SERPs, for example: you can certainly expect that Tidal, iTunes and YouTube are seeing excellent click through, as people seek to stream, download or watch the album.

Over time, these search results may revert back to a state where the sugary beverage once again rules the roost but realistically, Beyoncé will have a long-lasting, fundamental impact and the SERPs will never be the same again. Beyoncé’s website, the album’s iTunes page and the Wikipedia article about the album will almost certainly retain their place on page one.

Hope that Beyoncé doesn’t name an album after a head term you’re earning revenue from.

The SERPs will continue to change for most keywords - especially for head terms.

To prepare for this, always diversify the type of keywords you target. Head terms aren’t everything and if (and when) something like this were to happen, there’s not much you can do to recover from it if you haven’t prepare accordingly. Target a mix of mid-tail and long-tail keywords to ensure you have a wide range of ways users can find your content. For example, the websites that only targeted the head-term lemonade for their drink products, may be affected by user behavior in the long term. Mid-tail and long-tail keywords may see increases in search volume as users may being to shape their keywords differently by looking for information on lemonade the drink, or lemonade to drink, may increase in search volume.

Brand and Clout will always win over tricks and short-term SEO optimizations.

Beyoncé had the power of permanently altering the search results. Why? Did you pay a team full of SEO hacks to do this? Nope, she didn’t need that. Beyoncé has build a long-lasting brand through traditional marketing tactics; she has a clear mission and gives people a unique offering that they can’t find anywhere else. Beyoncé doesn’t use tricks; instead she changes the way users search in the first place by creating a new product that people want. This is the gold rule of marketing that we should strive for.