So with the Vice Presidential debate upon us, I figured what better time to finalize my two part series critiquing presidential PPC efforts. Since Part I outlined President Obama’s PPC efforts, opportunities and recommendations, I think we can all guess where Part II is headed… Presidential candidate Romney’s PPC manager was a bit more liberal with his keyword selection than Obama's. It seems like Romney is using broad match, as variations on his name and party displayed a number of ads. Secondly, it looks like Romney’s team is using negatives well, as no ads displayed for Mitt Romney gaffe or Romney Family Party Yacht.

Not only are ads showing for variations of Romney’s name, I was also able to find ads for his running mate, Paul Ryan, and for queries related to the Republican Party. Copy for these queries was at least somewhat tailored and contained a relevant word or two, indicating there are several ad groups in the campaign. Sitelinks remained static however, so I doubt the team is using more than one campaign.

Much like President Obama, Romney is also not showing for competitor terms (Obama, Joe Biden, Obamacare) in AdWords, though the two are at each other’s throats in Bing. I’m not sure if this is a quality score issue, but if Romney is bidding on Obama terms in AdWords, he better crank his bids.

So apparently Mittens opted for the “set it and forget it” strategy for PPC. Most of the copy points that I found during my research (on 10/10) were extremely outdated, focusing on getting users to accomplish things that really won’t help a whole lot. The ad copy directs users to Contribute Now, Donate Today, or Buy The Official Bumper Sticker (no, seriously). At this point, does Romney really need any more money for his campaign? Isn’t it more important now to push out important campaign messages and to sway voters who might not otherwise vote?

To me, this is the equivalent of showing ads focused on Halloween costumes in mid-December. It’s still sort of relevant (everybody loves costumes), but is that really the message you want to put forth at such a crucial time?

On the positive side, Romney’s ads do have a few strong value propositions that hint at some of the pain points his campaign has been trying to drive home. Get America Back to Work & Deliver The Real Recovery are both clever pieces of copywriting that deliver strong messages. Still doesn't make sense to ask for seemingly random denominations of money and talk about economic recovery at the same time though.

This is where Romney falls way, way short. He’s asking us to jump into bed with him on the first date; rather than directing us to a landing page that outlines his plans, why we should support him and why he deserves our vote, he simply asks for money right off the bat.

I don’t know about you, but I don’t throw money to everybody that asks for it without a reason why they deserve it, or an explanation of what they’re going to do with it.  The Debate Night sitelink leads to an eerily similar landing page, while the bumper sticker link to a rather unremarkable product page. 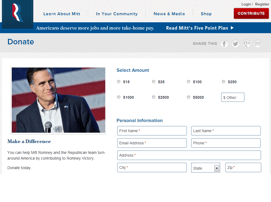 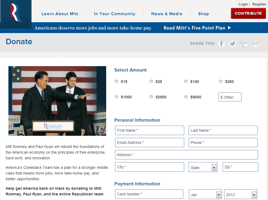 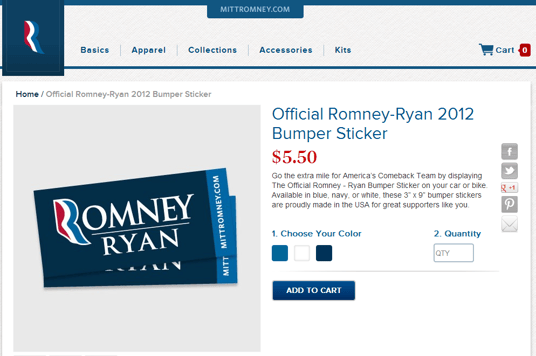 Romney is using Extensions to sell a variety of bumper stickers. Smart!

Much like President Obama, I feel like Mitt Romney really missed the boat as to what paid search should REALLY be used for, and what metrics are really important.  Both campaigns should focus on getting an important message out there, swaying voters, addressing their concerns and answering their questions. The SERP’s are a great opportunity to get your message out there, rather than just being there to be there.

So who’s up for pitching the Presidential Candidates in 2016??