The 5 Forces of Competitive Analysis

Fresh off a business degree, my brain is still rattling with four years of memorization and conditioning to pass those tests. Because in the end, who really needs to know that stuff, especially as an SEO, right?

One of biggest misconceptions of SEO is that you need to know computers, not business. This mentality will not get you far at SEER and will not likely get you far in SEO (anymore.) As #RCS really begins to sweep the industry, SEOs must really understand their client’s business, goals, competition, and industry to make a difference.

When it comes to applying this to SEO, I thought it was a brilliant idea. And of course, a quick Google assured me that I was not the first. Krista LaRiviere has an awesome post that examines this idea at a macro level and applies Porter’s model to overall keyword competition.

I wanted to apply this concept to a more micro level and identify the forces that determine the level of competition from a given competitor. Simply analyzing your competitors will do nothing unless action can be taken to meet and exceed the competition. Being able to identify the aspects that are driving competitor success (in this analogy, the forces) on a micro level gives actionable insight into what steps should be taken by your company to remain competitive.

So without further ado, I give you the Five Forces of Competitive Analysis:

Chances are that if you have glimpsed at any kind of SEO headline in the past few years, you know the emphasis has been placed on quality not quantity (hold on, let me get there.) But that doesn’t change the fact that there is still a strong correlation (not causation, right Rand?) between number of links and the ability to rank well for targeted terms. Take the following search for “climbing equipment,” for example.

The pages ranked 1-10 in the SERPs collectively received more overall links than those ranked on 11-20, 21-30, etc. (with page 3 being the anomaly. Again, correlation, not causation.) Note: Pages 4 and 5 both included “Videos for Climbing Equipment” in place of one standard SERP listing.

The takeaway here is that even though ranking algorithms are moving from raw number of links and more to the quality of links, data still shows this strong correlation between rankings and quantity. When digging into competitor backlinks, with all else the same, doing #RCS and driving more links to your site will increase your ability to compete in this space

See, I told you it was coming.  With Penguin, much emphasis has been taken to weed out manipulative links from Google’s index. Hundreds of thousands of sites panicked when rankings dropped overnight. Others are still waiting it out to see if they get caught.

Penguin also greatly benefited many sites who have been implementing #RCS for years. These companies have made an effort to get links in places not just for the sake of the link but also for the branding, visibility and referral traffic that links can truly provide.

So how do I identify a “quality” link relative to a competitor’s so that I know where to aim?

One metric to identify a goal is average domain or page authority authority. Looking again at the search for “climbing equipment,” REI.com takes the first spot. If I am Backcountry looking to de-throne REI, I would look at average domain authority of REI’s backlinks to set a goal of where I need to shoot. 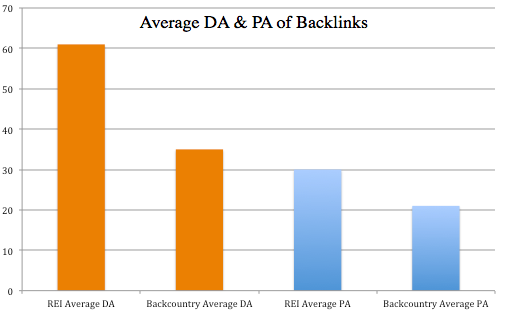 It’s no secret that .edu and .gov links generally pass more value than others. Having a diverse backlink portfolio not only looks natural to Google and search engines but knowing what your diversification looks like can help you identify where your strategy could use the most attention.

While I claim to be no expert in social influence on SEO, it would be negligent to completely write off social as a valuable tool for insight into a competitor’s reach. If anything, social is one of the most obvious and readily available signals of a company’s overall effort to engage and drive more qualified traffic.

Dan Zarella’s post at SEOmoz presents a great study on the correlation between social shares and links. The graph below, also from Dan’s post, summarizes the strength of these correlations with LinkedIn, Twitter and Facebook shares. 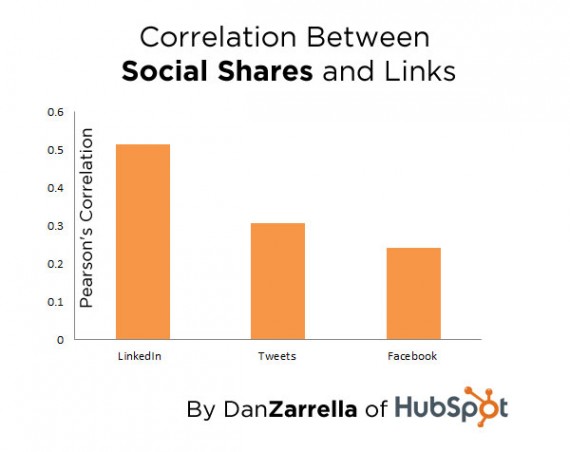 Social may still be in its infancy but it would be foolish to ignore the impact that it can have on one’s presence in search. As they become more and more integrated, social and search are no longer siloed or isolated efforts but will continue to play a larger role in one another.

Strength of the Competitor

Competitor Strength is both the result of the previous four forces as well as the fifth force. As the other four forces continue to increase the strength of the competitor, it makes it easier to drive a higher quantity of diverse, high authority links to dominate the SERPs.

There is on going conversation surrounding Google’s bias and favoritism toward big brands but history shows that it is the market that tends to favor big brands, not just Google. As brands become stronger, it only gets that much easier for them to continue getting stronger. Much like the first million dollars is the hardest, the first million links or likes or shares are the hardest.

The takeaway I want readers to get is the similarity between Porter’s Five Forces Model and what I am calling the Five Forces of Competitive Analysis. While Porter’s model analyzes competition in any given industry, I wanted to apply this to a way for us SEOs marketers to analyze the strength of a competitor alone.

Are Affiliate Links Bad for SEO?