301 Redirect Test: How Much Link Juice are YOU Losing?

In a recent interview conducted by Eric Enge, Matt Cutts indicated that while 301 redirects are still the preferred method for migrating between pages and sites, a certain percentage of PageRank is lost through the redirect.  This disclosure has stirred the pot in the SEO community  whereas before it was assumed that a 301 would pass all of the link juice, now many are asking how much is lost? and what else can we do?.

Given that no definitive answer has been provided about the exact percentage lost, we decided that the only way to determine the true value of a 301 was to analyze a site that had recently changed domains.  Fortunately, one of our clients moved domains in the beginning of 2010 and had implemented a 301 on their old site.  We managed this account before and after the switch, so data from both the old and the new sites was available for analysis.  The following case quickly outlines what weve seen with these domains in particular, and how the 301 is functioning.

In the first graphic we can see the Open Site Explorer data for both sites.  This was where we started our research because we wanted to see how an independent tool was evaluating the two domains and what type of link juice was being passed through.

While it is clear that the 301 appeared to be passing significant value through this analysis, the most important factor was how the engines were treating the redirect.

It is important to note two things about the above graphic.  First, the same number of keywords were tracked for each site  keeping the KWs as a controlled variable.  Second, the site being analyzed experienced a fairly significant jump in traffic around the holidays.  So while this data is not ideal given the peaks in the graph, it does help demonstrate the overall results since the switch and the relative speed with which traffic stabilized.

The next graphs show the organic search traffic in Google, Yahoo!, and Bing for this sites top keyword.  For reference, this word gets approximately 550k searches on exact match per month. 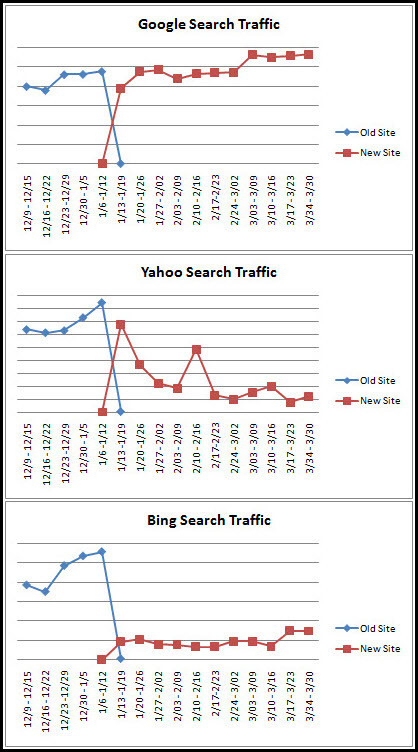 Clearly Google is passing value from the 301, and traffic numbers have actually improved since the switch.  Yahoo! showed an initial spike, however traffic dropped significantly and has not returned to previous levels.  Bing does not appear to be passing any significant value and traffic levels remain low.

So what does this all mean?  With this quick analysis we were able to reach the following conclusions:

If you have any questions about the information provided above, please leave them below in the comments section.  In addition, a great review of the entire interview with Matt Cutts (complete with helpful illustrations) can be found on the SEOMoz Blog.