How Google is Making Your Favorite Brands Market for Them

Remember when Facebook started? I do. I was still on MySpace and in high school – I couldn’t wait to get my college .edu so I could get an account. They made people wait, and slowly opened the social network to more and more people to create demand. First Harvard, then ivy leagues, then top colleges, then all colleges, ect ect… You can contribute some of Facebook’s success to starting out and limiting users. Once you tell people they can’t have something they just want it more. Then fast forward 5 years and Google wanted to get into the social media game. I remember Google announcing it and I was so pumped to get one, and then I did a week later… and so did everyone else. And then after checking it out, people moved back to Facebook. 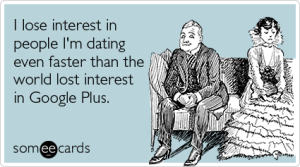 But Google is now pushing it on to us whether we like it and with help from our favorite brands and celebrities. You might have noticed a new thing in Google this week. On the right hand side of the SERPs above the ads is now some pretty…pretty…pretttty good real estate. There’s box that will show you the top Google+ results. However these results aren’t placed there because of some fancy algorithm they are there for other reasons which I will explain in this blog post.

Google+ is making your brands advertise for them

The new episode of “This Week in Tech” was one of my favorites of all time – they talked very extensively about “Google plus your world” and had some awesome examples that got me thinking about Google alternative motives. The first example was when they searched for “Cars” and got this:

Wow, Ferrari and BMW are both displayed at the top of the first page for such a competitive keyword? I don’t have them in my circles and I don’t talk about them on Google+ (I’m more of an off road truck kind of guy) so why are they there? They are there because they are car companies that have the most followers. (At time of writing General Motors is in 2,532 circles and Ford Motor Company is in 4,266 circles.)

So then my marketing degree kicked in, and it sparked, I think I know what they are doing! They are making companies start advertising their Google+ pages and thus advertising Google+!

Ok so how did I get to that conclusion? Let’s backtrack here, Ford and GM are definitely some of the automobile industry dominators who are usually on top of their marketing game, so once this comes on their radar they are going to want to beat Ferrari and BMW out of their spots in order to show up on the first page.

But how will they do that?

By getting people to add them to their circles on Google+.

And how do they get people to add them to their circles?

The same way people get Facebook likes - marketing campaigns. Give the public a reason to “like” them/ add them to your circles. So that could be giveaways, deals, exclusive offers, and concept cars pictures. Just cool stuff that we want to see and get that we can’t anywhere else.

So let’s say Ford and GM start dumping all this money into their Google + pages.

But they think, if no one is following us on Google+ how do we get the word out?

Advertise these exclusive offers on their Google+ page on their website and across their competing social networks! (The Ford Facebook fan sites have over 6 million fans across their different pages and General Motors has over 3 million across theirs).

In summary, by having these exclusive offers, to get followers, in order to have their company name show up on the top of page for the search term “Cars” (that is searched locally 45,000,000 times a month), they have to also promote Google+ itself, and get their fans, follows, and visitors of their far greater networks to sign up for Google+. And the more people that sign up the more information about you Google gets! Genius!

Here’s another example from Danny Sullivan’s post on Search Engine Land. Just like the Cars search term showing the Google+ pages for Ferrari and BMW it shows the same for “music” and “movies”. Here’s what it looks like for those search terms: 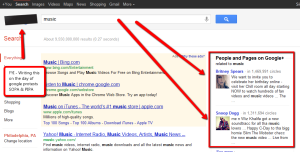 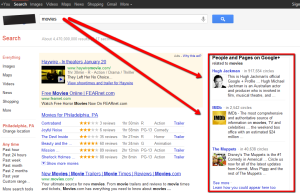 Just like your favorite car company’s celebrities are singers and pop stars are brands, and their management team market them like a brand. The more they are in the public eye the more famous they are. So I think that you will see a lot more celebrities start showing up in Google+ thus more people joining Google+ to follow them. In fact, Lady Gaga who has the largest twitter following and over 46million Facebook fans did not have a Google+ page last week until Sunday when she created one. Did she start a Google+ page just to be more in touch with her fans? I think NOT! She wants to beat out Britney and Snoop for that spot. And she is doing just what Google wants her to do, advertising Google+ on her other networks and basically telling her fans and followers “Hey, I’m on Google+ you should come join me, if I [Lady Gaga] am on it, it must be cool!” 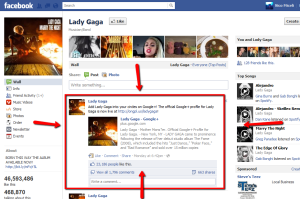 Just wait, I am predicting a sudden shift in Google+ users because there is going to a fight for those top when entertainment key words are used.

But what does this mean for SEO?

First it means that you better have a Google+ page and start thinking about it more and more. You are going to need it, if you want to achieve page one domination in the future. Also the Google+ accounts that show up on the right hand side, as far as I can see, are only based on the amount of circles you are in. Personally I think that’s a little messed up, and contradictory to Google’s algorithm for search results. They have over 200 factors to rank sites organically and even have a complex formula for the ad rank quality score (thanks for the ppc info Aaron!). But for top of the page real estate it’s only the amount of circles you are in? C’mon Google, your better than that. I tried the searches logged in and out of Google+ and even tried it in incognito mode and got the pretty much the same results. If you refresh the page a couple times you will see some other accounts but they are still the top people in the Google+ field and not ranked on relevance. Another test I did was I logged into Google+ and added both Ford and GM to my Circles and refreshed the “car” SERPs and still got Ferrari and BMW. I even tried a branded search for Cyangenmod (the brand name) the community based firmware for Android and it didn’t even rank 1st for its own Google+ page. 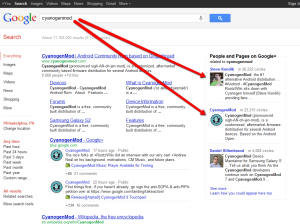 Ya, its #2 but when I refresh it doesn’t even show up – for a branded search?! (And look at the organic results, why is their Google+ page showing up ahead of their Wikipedia page? I can bet that the wiki page gets a lot more traffic and has a lot more links then its G+ page. But organic social results are a whole other story for another post.) 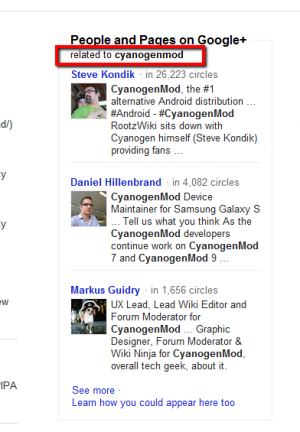 What do you do you think about the new Google+ integration have you noticed anything funny or odd about the accounts that show up for different search terms? Do you like the changes in social search? If so, please share your thoughts and ideas in the comments box. And don't forget to follow me on twitter.