How to Use Google Ads Campaign Experiments

Have you ever wanted to test a new bidding strategy, setting, or other element of your campaign with a fixed budget or duration? Campaign drafts and experiments in Google Ads let advertisers do just that.

Experiments allow you to easily control and monitor a change without fully launching it across the whole campaign. This is achieved by:

Why use experiments over traditional ad rotation or period comparisons?

If you’ve ever tested landing pages, setting changes, or advanced bid adjustments in a campaign, you may have done a period test or used Google’s ad rotation settings to give you a clean comparison. While these strategies let you quickly test a change on the fly, they often lead to inaccurate data, poor performance, or lots of manual analysis. Here’s why:

We’ve all done period comparisons before. You make a settings change, wait a few weeks, then compare performance period over period. As long as you know your start and end dates, you can usually get a good idea of whether the change was impactful or not. But things can get complicated...

If your business is seasonal and your experiment is running for 1-2 months, you won’t have an apples-to-apples comparison unless you adjust your results for seasonality. That adds an extra level of complexity to the experiment that many don’t think about. If you’re a seasonality adjustment pro, go for it, but it’ll take some time!

There are some account changes that you might not want to commit to with your full budget if you’re doing a period comparison. For example, if you want to test out target CPA bidding in a campaign but are unsure of the results you’ll get, you might not want to switch the campaign to that bidding strategy right away. If it ends up underperforming, your account could be in rough shape and you might be pressured to end the experiment early. We’ll get into how to manage this uncertainty later!

A common and easy way to test creative in a campaign is by tweaking your ad rotation settings -- rotate indefinitely and optimize. If you’re testing some new ad copy headlines, this can definitely work, but you might want to have more control if you’re doing a larger landing page test. Below are the pitfalls of relying on Google’s ad rotation settings.

If your ad rotation is set to optimize, you’ll likely run into skewed data since Google’s machine learning will determine the “best” ad to enter the auction based on historical data or other signals. In this case, your control might have more data than the experiment which could lead to a long testing period and difficulty achieving statistical significance -- basically, the numbers don’t match up well and you’re waiting forever.

How do experiments resolve these issues?

Seasonality: Both the control and experiment run at the same time, so you get a clean comparison during the testing period. No seasonality adjustments necessary.

Uncertainty of results: If you’re skeptical about what you’re testing, you can allocate a small percentage of your budget to the experiment. Additionally, you can end the experiment and move your whole budget back to the control with the click of a button.

Skewed data: Experiments ensure clean and even delivery of ads as long your budget split is fairly even.

Poor performance and lower ad rank: While overall campaign performance may still decline when running an experiment that doesn’t pan out, your original campaign won’t be impacted and your data will be clean.

How to set up and analyze a campaign experiment

Before you set up any kind of experiment, have a clear hypothesis and goal in mind. This helps you get buy-in from teammates and managers, and also makes analysis easier when it’s time to conclude the experiment. One of our analytics team members, Kevin Rutter, walks through this here.

Example: We’re testing a maximize conversions bidding strategy against manual bidding in our campaign to achieve a statistically significant decrease in CPA.

Alright, let’s walk through the steps.

Step 1: Create a draft of your campaign

Creating a draft essentially copies your campaign and allows you to tweak your landing pages, settings, and other elements. In the screenshots below, we’re creating a draft of “Test Campaign” that uses the maximize conversions bidding strategy.

💡 Tip: You should only be changing one variable so that you can easily identify why performance improves or not. If you test a new landing page and a different bidding strategy, you won’t really know which change is responsible for a possible improvement in performance. 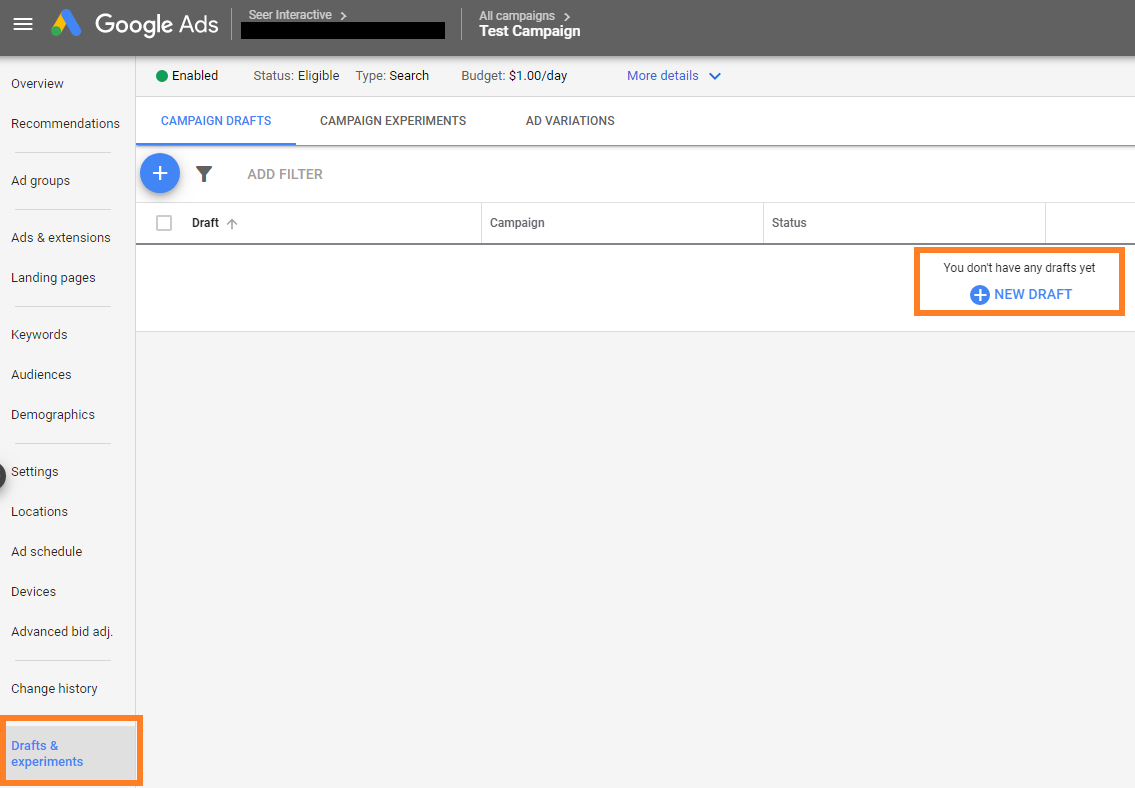 Step 2: Apply your draft as an experiment

Once you’ve created the draft and set up what you’d like to test, apply it as an experiment. This is where you can choose an end date, budget allocation, and name the experiment.

Keep in mind that you can’t re-enable your experiment if the end date has passed, so it might be better to leave the end date open. This is a good option if your campaign has low conversion volume and you’re expecting the test to run for a while. 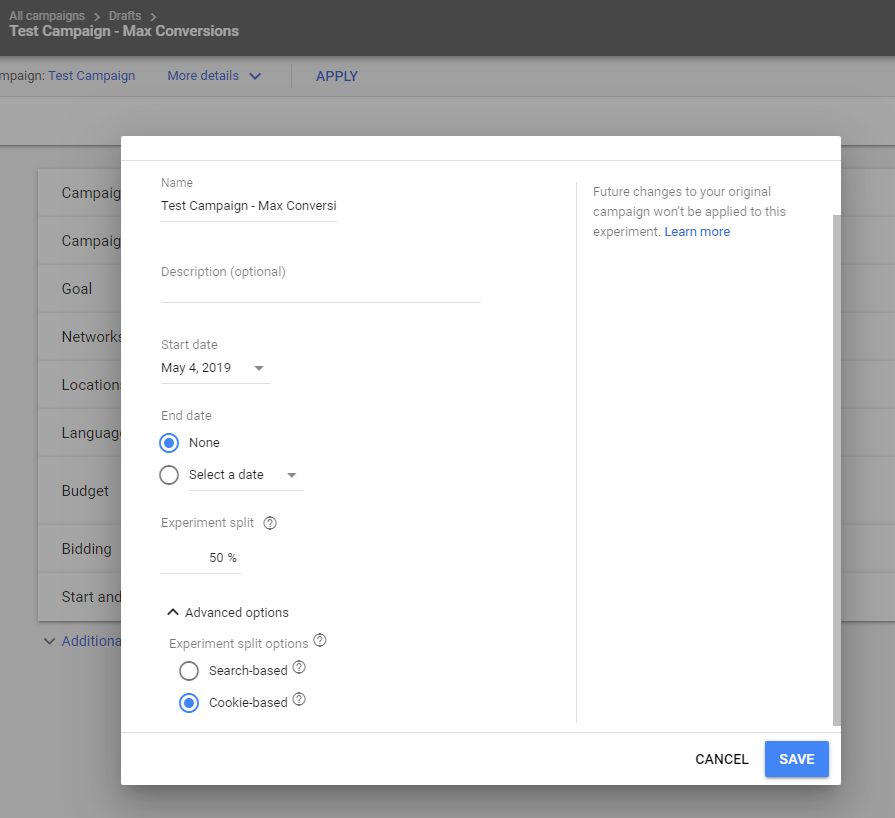 Note about experiment split options: If you want users to only see one one version of the campaign, select a cookie-based split. If you’re testing out two landing pages, for example, this ensures that the user only sees one of those if they search and click multiple times. A search-based split randomly assigns users to either campaign.

💡 Tip: If you’re hesitant about what you’re testing, allocate a smaller percentage of your budget towards the experiment. It might take longer to achieve statistical significance if you do this, though.

Don’t worry about period comparisons or other manual analyses -- Google handles the hard work for you. If you want to view performance, jump into the campaign experiment and check out the comparison metrics at the top.

Google provides a simple view of your key metrics during your experiment date range and notes when a metric change is statistically significant (note the little blue asterisk next to impressions). Hover over the metrics to see how each campaign version is performing.

If you’re ready to finish up the test, whether it’s successful or not, you can end it or apply it to the full campaign.

Use cases for campaign experiments

Landing page and creative testing (Seer helps with this, FYI)

Trying to test a shorter lead generation form or a different product page on your site? Create an experiment to get a clean split test going and optimize towards post-click actions.

Allocate a percentage of your campaign budget towards smart bidding to see which automated bidding strategy works best for your campaign.

Create an experiment to test out device bid adjustments, dayparting, and other more advanced bid modifiers without having to compare performance period over period.

Campaign experiments allow advertisers to easily test changes in an account without the hassles of skewed data, time-consuming analyses, and inconsistent ad delivery. Control your budget, duration, and create a clean experiment for your new bidding strategy, landing page, or setting, and let Google do the number crunching for you.

If you’re looking for more PPC tips, check out some of our recent blog posts or get in touch with us!