What Is a Causal Impact Analysis and Why Should You Care?

Let’s talk about noise. Not the type your car makes that causes you to crank up the stereo, but the kind that can make your marketing testing infuriatingly difficult to read.

Most of us have probably been there – you launch a new test and the next day a news story about the brand comes out, the fed changes interest rates, or Outkast drops a reunion album. These events can disrupt otherwise steady performance and they’re totally out of our control as marketers. Even changing weather patterns can have a significant impact on certain industries.

This noise can make it very difficult for a marketer to separate true impact of an optimization from, well, everything else that’s going on in the world.

You might be reading this and thinking, “yeah, no duh, that’s why we A/B test.” That’s fair, and while my personal misgivings about Google’s Drafts & Experiments are a blog for another time, A/B testing is generally a great way to compensate for noise and generate accurate test results. There are, however, many instances in which an A/B test is simply not viable.

For example, you change bid strategy on a paid search campaign, a promotion goes live, Apple rolls out iOS 14.5. There’s no shortage of instances where keeping a holdout group for an A/B test is not possible or just not desired.

Instances like these, where a true & identical control group aren’t feasible, force marketers into pre/post analyses. Here we run into noise, are forced to report “muddy” results, or can be duped into coming to the wrong conclusions.

Causal Impact Analysis can reduce the noise and provide real statistical insight into your efforts giving you the confidence to move forward with, or revert, marketing initiatives.

What is Causal Impact Analysis?

Causal Impact is an algorithm built by Google to create a Bayesian structural time series model based on multiple control groups to estimate a series of baseline values for the time post-intervention. OK, that might be a bit intimidating but we don’t need to be statisticians to understand and use Causal impact.

Breaking it down in more digestible terms, Causal Impact:

Visually, it can take a chart like this, which is difficult to draw conclusions from: 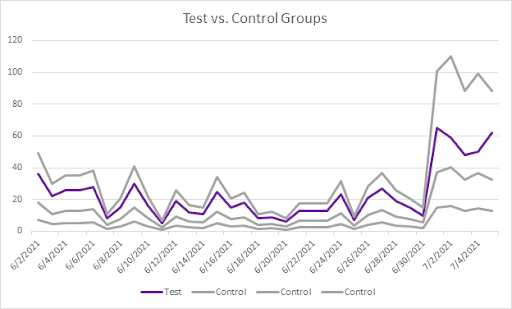 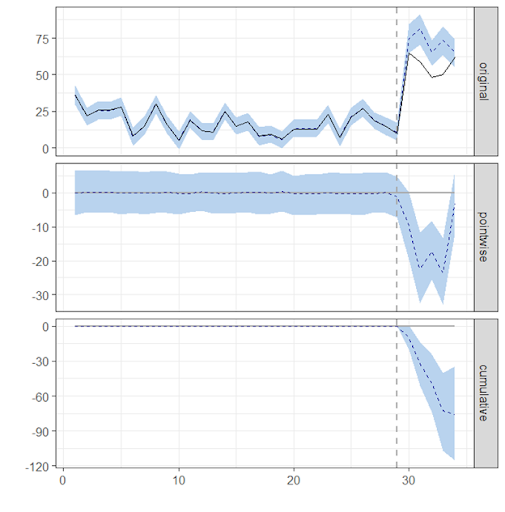 This Casual Impact visual now shows us that even though test volume is up in the post period, it has not increased as much as we would expect given the performance of other related channels.

Causal Impact can produce a number of outputs, but two are especially useful: the graphs above and a summary of impact. 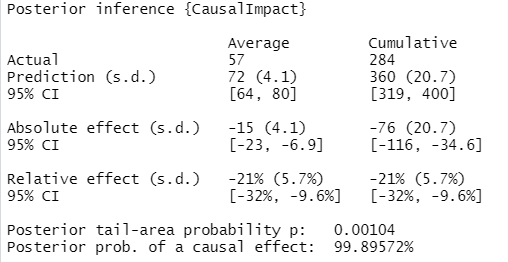 A Causal Impact Use Case

Say you’re working for an eCommerce advertiser who runs Google Search, Microsoft Search, and Facebook Ads. In your Google Paid Search ads, you use a data feed to insert product prices, but you do not do this on any other channels.

Due to material cost increases, the advertiser raises prices of their products 20% across the board.

You can’t control product prices, but you can control Google Paid Search ad copy, so you turn to Causal Impact to understand how price changes have impacted click volume. Because it’s the advertiser’s busy season, clicks are up post price increase on Google Paid Search, and all other channels.

On the surface, it seems like no changes are needed. However, a savvy advertiser will want to know if less competitive prices in the ad copy are actually hurting click volume.

In this instance, you can use Google Paid Search volume as the test group with organic, direct, social, and Microsoft as control groups. Running the data through Causal Impact might show that click volume through Google Paid Search is actually lower than the model predicts.

💡 You can now recommend replacing ad copy that highlights pricing with another value proposition.

This is just one example of countless ways to leverage a Causal Impact Analysis. Other uses might include analyzing the impact of bid changes, promotions, landing page updates, and even campaign launches. The opportunities for how too apply this analysis in decision-making are virtually endless.

Like all algorithms, Causal Impact is only as good as the data it is fed.

Take the time to find stable and useful control groups when running a Causal Impact analysis to produce the best results.

FInally, Causal Impact is most valuable with larger data sets over a longer period of time. While it is technically possible to use this model for a one day promotion, a pre/post analysis would provide similar results in less time.

Similarly, when the model does not have enough data to work with, the confidence interval can be so wide that the analysis is of virtually no value. These caveats can rule out Causal Impact analysis for short sales of a very specific product, for instance.

Here’s the letdown, while you don’t need a degree in data science, running scenarios through a Causal Impact model isn’t as intuitive as a pre/post model. However, it is relatively straightforward to implement in R.

As a bonus, it won’t cost you a cent more than your time. While R might be intimidating at first, I implore you to give it time. Once you’ve successfully run your first analysis you will find it much easier and faster to run subsequent analyses.

Since this blog is not intended to be a tutorial in R, but rather to spark interest in Causal Impact, I would suggest following up with these resources: