Before I started my career in PPC, I knew about the basic account structure – campaigns, ad groups, keywords. So when I started, I always figured coming up with campaigns, ad groups, and keywords would be a piece of cake. How hard could it be? As long as you understand your product/client enough, should be pretty easy. Well, as it turns out, it can be pretty hard, especially when you're trying to come up with expansion ideas for an established account!

One of the best sources for expansion is the target audience itself – specifically what exactly they've searched for that got them to click your ad in the first place. We look at search query reports to try to find themes that pop up that we never thought of before. But that can be really hard to do, especially if you're dealing with a large volume of queries – the repeating patterns of themes can blend into a big ol' mess of text. 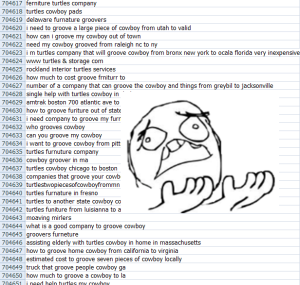 Enter TagCrowd – a tool that takes a sample of text data and consolidates the trends contained within that data into an easy-to-digest graphical representation. In other words, it takes a whole lot of text and makes the most common themes stand out: 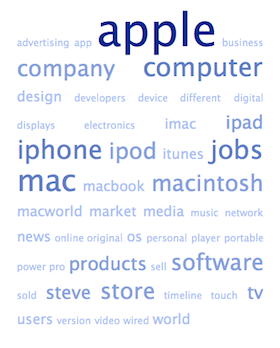 I think you can probably guess why this is useful and how it could be used to your advantage here! But here's a brief tutorial on using TagCrowd for those that haven't already jumped in and started playing around:

Start by pulling a Search Query report. You're going to want to set a pretty long date range – six months should do it. Once you have that, sort by conversions, so your top-converting queries are at the top of the list. Since TagCrowd has a limit to the file size that it can analyze (3MB of pasted text or a 5MB plain text file), we only want to look at the terms that are performing best for you. So, take the top queries and paste them into the TagCrowd interface, or save as a plain text notepad file (.txt) that can be uploaded into the interface. 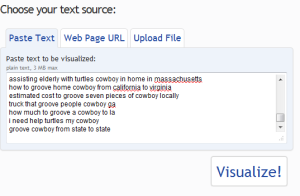 Now, before you go clicking "Visualize!" and getting your cloud, take a look at the options. You can set the maximum number of words you want displayed. I like to set this to 100 – not too big or too small. Set your minimum frequency – you don't want words coming in that have only appeared a relatively small number of times, especially with a large data set. Set this somewhere between 50-100 for large data sets, set it lower for smaller data sets. Click "Yes" to "Show Frequencies?" so you don't have to guess just how many times a word appears in your data set. I also like to keep similar words grouped, since we're looking for themes. You also have the option to exclude words you KNOW don't apply or on which you're already bidding. 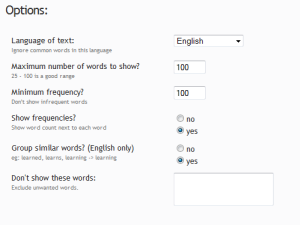 Alright, Champ, go ahead and click the big Visualize button now! It may take a little while to generate your cloud if you had a large data set. If it was too large, TagCrowd will eventually stop trying and yell at you. Cut your data set down (from the bottom) and try again. Once you get a look at your cloud, the terms that appear most frequently will be displayed the largest. In the example below (edited for client anonymity and hilarity), chances are I'm already bidding on "Shuffling" and "Turtles" terms, but "Cowboy" and "Grinding" terms may have eluded me in the past. Since we already know these terms are converting, let's do some keyword research and put together a nice new campaign or ad group with which we can expand our account and increase performance! 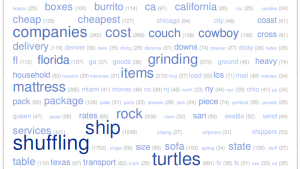 Some other applications we've found for our clouds involve account refinement. In the same set of search query data, identify popular geographies or competitors by using options to filter out the main terms on which you're bidding and other major themes that come up. For any two-word phrases, geographies, or competitors that you are aware of (e.g., "Sell Widgets", "San Diego", "SEER Interactive") edit your data set before plugging into TagCrowd by doing a find-and-replace and inserting a tilde between words you want to keep together (so, search for "San Diego" and replace with "San~Diego" in order to keep it together as one term).

Use the results to your advantage by bidding on specific geo-modified terms, start or expand a competitor campaign, or to geo-target based on the most popular regions that come up. You can also use data from competitor spy tools that you're already using for competitive analyses to pull thousands of keywords on which your competitors are likely bidding, and run them through TagCrowd to find the major themes that are common between all of your competition to make sure you're bidding on them too! 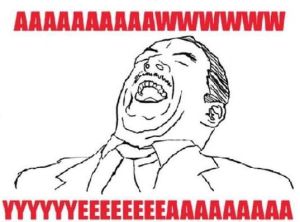 It should be noted that TagCrowd is in a beta stage, and to use it for your business, you should purchase a commercial license. They will eventually be rolling out a premium business account as well. But in the meantime, give it a whirl and see if you can pull some new themes out of your users' search queries! Let us know how it goes or if you've found any other creative uses for TagCrowd in your PPC accounts!