AdWords came out with a new feature, Auction Insights, late last month. Auction Insights can be found in the campaigns section, keyword tab under the 'keyword details' subheading.

Auction Insights enables advertisers to see who else is bidding on a single keyword. Rimm Kaufman made a good point that this can get tricky if more than one keyword in an account could trigger a query, which is basically everyone who doesn't have an all exact match account. However, their rep assured them that there is 'no double counting of an impression opportunity' so the data can be used for analysis.

To identify an ideal bid/position, I’ll go through each statistic and give you the scoop on which statistics could be misleading. Knowing the minutiae of the Auction Insights statistic definitions is key to using Auction Insights correctly. We will use a sample auction (sorry, I’ve blocked out keywords, bids and competitors to keep this confidential) and how we can use this. 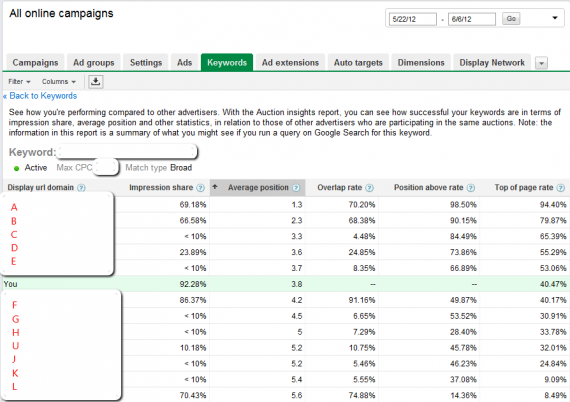 Looking at this auction, I see several things I need to know when making bid decisions and trying to reach a certain position

Looking at this situation as a whole, I'm going to keep my bid where it's at or maybe increase it slightly. I'd have to raise bids a lot and/or improve quality score substantially to get the much higher ad rank needed to dislodge A or B and I'd risk a bidding war with A. Conversely, we're in tight competition with F and have some potential threats (U, J and G) we don't want to give a chance. If we don't protect ourselves by keeping our bids up, we could get knocked down a few positions on the SERP's.

The recommendation on what to do will vary by keyword auction. The mindset stays the same:

The key thing to remember is that in Auction Insights, position above rate is the only unbiased statistic reflecting the auctions both you and your competitors are in. All of the other statistics are competitor data, independent of whether you're in the auction. For the purposes of setting bids to increase/decrease your volume, costs and position, use position above rate more.

What other ways are you using to analyzing Auction Insights?