I just have to say this: Thank you, Google!

Many users were switched into the updated Google Analytics interface this afternoon and were greeted with some fantastic updates. Not only was the appearance improved, but there are functionalities we've all been anxiously awaiting since last March.

We're still exploring here, but rather than just tweeting every thing we find, let's go through together! I'm not going to run through any minor cosmetic changes, just the ones that really matter.

1) Advanced Segments Can Be Shared

2) Dashboards Can Also Be Shared

Prior to this update, dashboards were only visible to the account that was used to create them. Now we have the new "Share Dashboard" button.

As promised in Google's recent post, new features make it possible to see how recently a report was generated and to quickly refresh the report.

Additionally, users can now see how much longer it will take a report to load.

Users now have some degree of control over how data is sampled in GA. This was also from Google's most recent analytics post. I think the best part about this is actually knowing what the sample size is, rather than being able to adjust. However, Google does now start sampling at 250,000 visits, rather than the previous 500,000, to make reports load faster. 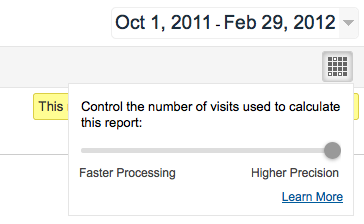 5) Update: Percent Change is *not* Back!

This continues to be a pain point for users. I jumped the gun on reporting the correction, but look forward to when that does happen.

That's not all, but that's all I have time for at the moment! Check back again for updates.

To answer the question we keep getting, no, PDF export isn't back yet. However, Google previously announced the old version of GA wouldn't be turned off until the new version is fully functional, so we won't lose the ability to PDF or schedule reports.