A SEER client was recently interested in trying to increase retention within their inactive member base.  With that in mind, we put together a string of recommendations which including re-engaging those members through Facebook Custom Audiences.

What are Custom Audiences?

If you’re not familiar with Facebook Custom Audiences, they’re a great self-service way to create audience groups for targeting in campaigns, which can then be layered with traditional Facebook targeting options such as users not connected to your page already.  Advertisers can create audiences using lists of Facebook User IDs, email addresses, phone numbers, or mobile advertiser IDs.  Faebook also allows advertisers to place a remarketing pixel on their site to create audiences out of users that have visited the site, or only specific sections of the site.   When creating a campaign, just select the custom audience to target once uploaded. 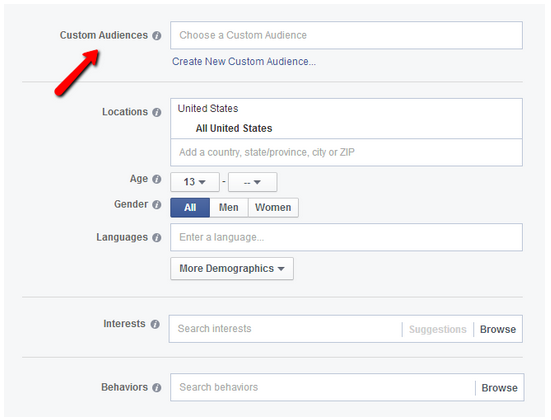 SEER developed campaign recommendations for an initial campaign test and requested an audience list in the form of email addresses for lapsed members which had not made a purchase in the past 3 months but had made a purchase within the year prior.  The client returned a list of 26,300 email addresses which matched to roughly 12,200 facebook users, or a 46% match rate.

A unique landing page was created specifically for the campaign, featuring a tailored promotion for these lapsed members offering a lower initial rate for re-engaging with the brand.  The ads also spoke to the fact that the users were due for a return, increasing the relevancy and adding more of a personal touch.

Facebook News Feed eligible image sizes were requested to ensure our ads were able to show in all ad locations.  Once campaign components were ready, the test ran with a target duration of 1 month.

The results of the first campaign were pretty impressive.  Over the course of a month we were able to drive 659 clicks to the site at $1/click and re-engaged 120 of the users within the service.  $4,645 in revenue was generated through the initial promotional offer, and an incremental $12,234 for a total of $16,879 in revenue.  That’s an ROI of 2438% to try and engage lapsed members through a different channel they frequent often in Facebook.

As a result of the success of the first campaign, a second campaign was activated, increasing the audience size to any lapsed member that made a purchase within the past 2 years but not the past 3 months.  While performance wasn’t quite as strong, we were still able to re-engage an incremental 78 members at a ROI of 1567%.

A third campaign targeted members who had joined the service on a free trial but had not accrued spend beyond after the fact.  The results did not match the success of the first two campaigns, leading to an early end to the campaign.

In total, we were able to re-engage 204 lapsed members, 6 of which had not paid for the service in the past, at an ROI of 1608% with plenty of potential for incremental revenue beyond that!

After analyzing performance of our ads at the completion of the campaigns, we noticed a disproportionate amount of impressions being served on desktop in the right hand column as opposed to the news feed or mobile, as it relates to total clicks, spend, or actions.  News feed ads saw upwards of 151% higher CTRs on mobile devices than desktop.

The takeaway here is to focus on optimizing creative towards mobile devices and the news feed, potentially creating separate campaigns with unique tracking to better control and monitor performance.  Ways to optimize for mobile devices would include shorter ad copy than desktop ads, testing more compelling images or colors in lieu of text, and linking to mobile-optimized pages if directing traffic to your site.  Users appreciate a seamless experience through advertising, so if they see an image that’s appealing and click through, they’ll expect to have an equally as enjoyable experience on the site featuring the same or similar imagery.

Could higher mobile CTRs be the result of “fat fingers”?  Separate campaigns for tracking mobile performance might help decide if the traffic you’re receiving is actually converting.  Increased usage of mobile for Facebook browsing, and social media in general, means advertisers should account for the limited ad space and refined focus on the main part of the screen where the content lives and is more likely to be seen.

Facebook also recently announced the rollout of Audience Insights.  This is great news for Custom Audience users because the tool will enable advertisers to view information about people in the audiences which brands have already created.  Outside of how many Facebook user profiles the audience list type matches to once uploaded, advertisers will then be able to gain insights into demographics, the category pages users like, how frequently they use Facebook and how actively they make purchases.  This can go a long way towards refining  audience targeting for tests like the one recapped above, leading to more refined ads and ultimately a greater return on ad spend.

Keep an eye out for the full release of Audience Insights in the next few months and let us know how your Custom Audience tests go!