Creating an Asset In Under 72 hours

Creating a marketing asset can often feel like a daunting task. As marketers, we want it to be a success. We block out hours for research and brainstorming. We create a plan to get the job done and another to promote it. We spend weeks and months creating something that’s supposed to feel ‘in the moment,’ yet the result is often something so watered down that it doesn’t make the impact we originally intended.

I’m the first to admit, I love a plan, but plans don’t have to take weeks or months to build. Sometimes the most unique and genuine assets are those we didn’t have time to tinker and tweak to death.

I learned that lesson almost immediately after arriving at SEER, when our Business Development team identified a conference coming to Philadelphia that had the potential to connect SEER with people we may not have otherwise met. In SEER fashion, we didn’t want to approach with a heavy sales pitch, but we knew there was an opportunity to create something to help, instead of sell to, conference attendees. The catch—we identified the opportunity at noon on a Monday and the asset (whatever it might be) needed to be done by that Thursday. It also had to be something that provided real value to those we sought to engage. So, we quickly brainstormed ideas and landed on a mobile-friendly guide to the city, broken-out by the hotels the conference recommended.

The guide, Conference Concierge, included our recommendations on where to grab breakfast, dinner, or spend some down time based on the amount of time you had. We utilized the conference hashtag to push the asset to attendees before they arrived in the city; along with emails and direct tweets sent to known attendees and conference speakers. Though we haven't identified any new leads (yet)—that wasn’t the goal. What we did achieve was providing a real example of the SEER brand to people who had never heard of us. 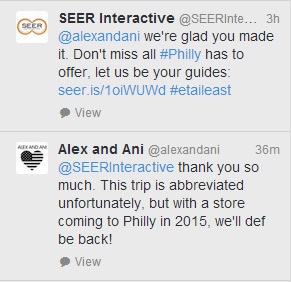 So, how did we create an asset that broadened our brand reach in under 72 hours?

We dropped the fear of failure.

At SEER, one of the company’s core values is granting the gift of failure. If we learn from our mistakes and use them to make an even better something else, we’ve succeeded. This can be challenging to get used to if you’re not from an environment where it’s okay to make educated mistakes. But if you’re terrified of failure, you’ll spend too much time picking at the holes in your idea and you’ll double the time it takes to get the idea out the door. By taking fear out of the equation, we were able to get the site up in such a short period of time, knowing we can always make the tweaks to version 2.

We stopped thinking of marketing assets as sales tools.

Marketers have accepted that not all assets need to serve a lead gen purpose, but normally the approach is then to create a brand awareness asset touting the wonders of your company to the would-be reader. It doesn’t have to be that way. Creating a ‘good will’ asset, solely for the benefit of the user, can drive just as much (if not more) brand awareness, than an asset emblazoned with your story. Brand awareness, cultivating community, and providing someone with information in a palatable format are all example of marketing assets that don’t lead to sales...immediately.

In 2013, Oreo won the Super Bowl with one simple tweet. The agency behind it could not have predicted the events that precipitated the tweet, but they were prepared for anything with a team of 15 ready just in case something momentous occurred.

We’re not all fortunate enough to have a handful of team members waiting for the next big event, but we can all utilize tools that enable our team to adapt to different situations. Building a mobile site can take months—we did it in under 3 days by utilizing Strikingly. We identified the tool thanks our teams habit of flinging around any new tools or tricks they find in email, giving us a library of assets to use in instances like this. After a quick search, we were able to identify the tool in an email that made the rounds at SEER months before; saving us hours of time searching for a tool to create the site and enabling us to hit the ground running. The initial preparation done by the team to search for and share assets allows everyone to adapt quickly and seize each opportunity—no matter the time frame.

This post isn’t meant to serve as the end-all-be-all guide to creating marketing assets. Instead, think of it as a friendly reminder that we, as marketers, can create unique assets that generate results without excessive planning and tweaking. By preparing ahead of time, you enable your team to adapt more freely. Utilizing tools built for specific situations gives you the chance to create something incredible without having to hire a team of 10 to do it. And, as J.K. Rowling said, “it is impossible to live without failing at something, unless you live so cautiously that you might as well have not lived at all.” Don’t be afraid to fail or to let your team fail. Celebrate the breakthroughs that come from those failures and use them to make the next round even better.