Ay caramba! We can now get email addresses from Twitter with the new Lead Generation Card.  This is a new feature; Twitter has done some testing but is now rolling it out to all advertisers with reps who use the managed interface.

When a user expands your Tweet, they see an image and description of your offer, and a call to action. Their name, @username and email address are already pre-filled within the Card—they simply click a button to send this information directly to you. 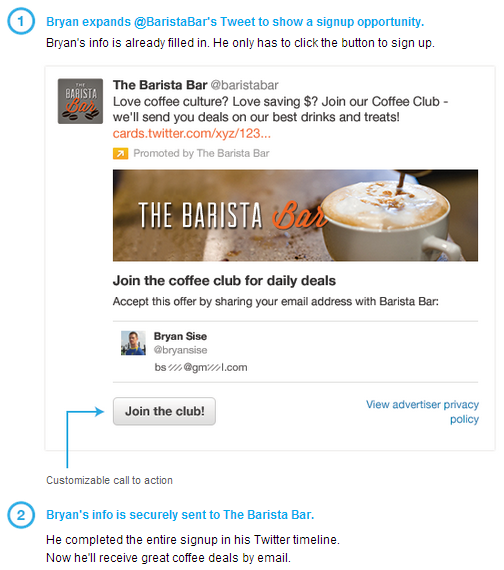 This could be a major development from Twitter.  Instead of having social media access to followers only, names and email addresses submitted via the Lead Generation Card make the following possible:

1- Increased touch points.  Companies can email market and sales teams can follow up via traditional means (email) to users who show an interest in a company via Twitter.  Our rep noted that it will require some work on the advertisers' end to create an HTTPS endpoint, and the advertiser will most likely pull in their tech team.  However, it sounds like it's worth a test for a client with a substantial Twitter campaign.

3 – Higher total engagement rates.  We don't think that users have to follow an account to fill out the lead generation card (though we are not 100% on this).  Users who don't want to have their Twitter feed blown-up by following more accounts can now use the lead generation card and expect email follow-up which can lead to higher engagement for the advertiser.  Some people prefer email follow-up to social media overload.

This has to be created through the Ads UI and is only available de facto on promoted tweets.  Creating lead generation cards isn't technically impossible without advertising, but is de facto that way because the reporting interface is unsupported and very weak.  To make the card, you'll need an image at least 600 pixels wide with a 4:1 aspect ratio no larger than 1mb.  The description is 80 characters maximum and the call to action is 20 characters maximum. 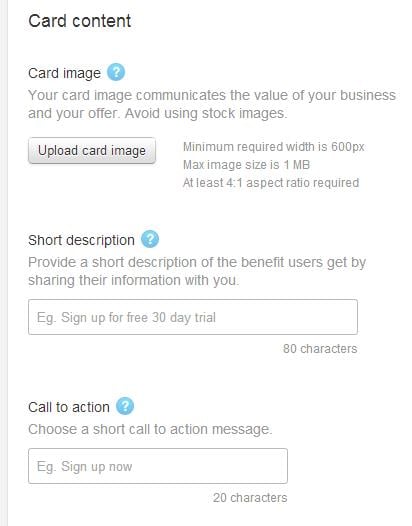 This could be Twitter's way of trying to entice more people to advertise so that they can set up the lead generation card.  Stay tuned for more updates!