When I first started working at SEER, a friend sent me this meme: 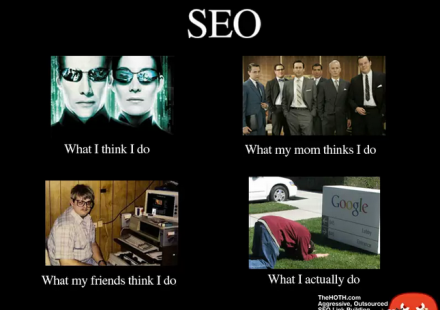 To which I responded, “Har har har”, and nothing more because I actually had no idea the extent of exaggeration/accuracy this stupid internet meme might represent.

My story is similar to many young professionals. About a year ago, I was a fresh graduate who was attempting to navigate through the existential limbo land that is post-grad unemployment. I had experience working in digital marketing with prior college internships, but still wanted to shop around in the field to figure out what I really wanted to do. I was offered an internship at a media & planning agency where I was asked what I wanted to focus on: media buying, display advertisement, or paid search. I decided to go with something I knew absolutely nothing about, which was search.

Zoom ahead 4 months and I’m applying to SEER for an open PPC Support position but my big mouth (along with Wil’s good faith) landed me a position on the SEO team. While I was stoked to start my first job, I was also kind of peeing my pants. I knew nothing about SEO. I found that despite both being acronyms, PPC & SEO are two totally different games. At this point,  I wouldn’t consider myself the sensei of SEO, but I also don’t think I’m a wasteoid when it comes to doing my job.  Here are the top four mantras that I consider the most valuable when it comes to kicking butt at SEO and SEER:

This is a reminder that keeps me incredibly grounded working in SEO. It’s so easy to get caught up in the world of Google when you’re monitoring algorithm updates, penalties, errors, and rankings. Google might seem like the internet Wizard of Oz, pulling levers & deciding the fate of your web presence, but that doesn’t mean it’s the omnipotent end all & be all. As Hummingbird has showed us, Google is trying to think more like a human, but we as the mighty mortal marketers still have the power & privilege to get on the human level. Take that, Google! So when it comes to improving your website, why would you want to act like a robot and use tactics like email spamming & link buying when you have the ability to cultivate relationships and produce thoughtful content?

Which brings me to my next takeaway:

Across the board at SEER, I’ve learned that honesty is (honestly!) the best policy. For example, being upfront and honest in outreach always plays out a little better. Keeping your messages short, sweet, and to the point has given me greater responses & also saved everyone a lot more time.This isn’t to say that every journalist or blogger that I’ve asked for coverage has said yes, but at least I was transparent and didn’t damage the relationship by inflating their expectations or tricking them. Our industry is constantly changing so it’s okay to say, “I’m not really sure. Let me go find that out for you.” Honesty goes even further here at SEER. Getting comfortable asking for help or crying mercy when I’m stuck has helped me do better for my clients and gain more respect from those around me. If you work with awesome people, use them! Don’t waste your time scrolling through search results when you can tap your neighbor who might just blow your mind.

Borrowing brain juice from the people has also helped me to realize the following:

SEER is a scrub-free zone. You don’t check your ego at the door here, because nobody has an ego to begin with. Is SEER competitive? Definitely, but that’s only because it’s a place where people like their jobs & like doing their jobs well. And how do we know we’re doing our job well? Data! Sometimes strategies in SEO can seem like an ambiguous process. In a perfect world, there’s a mystical-SEO crystal we look into and can map out how a site can achieve its goals strategy by strategy. Unfortunately this has yet to be invented, but data can be just as good in aiding campaign foresight. And luckily at SEER, we don’t mess around when it comes to the hard numbers. (Someone’s title here is actually Data Scientist). I’ve learned that your point is painted more clearly and credibly if you’ve done your research and can back yourself up.

4. Giving a Damn & Taking It Personally

This is the one mantra that’s always echoing in the back of my head and one that I’ve held the closest to me since I started at SEER. It’s not rocket science that when your clients do well, your company can also benefit. But what about when client projects aren’t going so great? What happens when there’s some serious tension and all bets are off? Instinctually, you’re going to want to put up the defenses, get discouraged, or want to even give up on a strategy/project all together. At SEER I’ve learned that there’s usually more to the story than flat out dissatisfaction. Maybe your client is under a ton of pressure or maybe there’s just some miscommunication.  Lots of times it’s as easy as picking up a phone or asking to grab coffee if they’re nearby. Taking time to step outside the project at hand, hearing them out out, and letting them vent a little can make a huge impact.

8 months later, I can look back at that stupid internet meme because I actually understand it. And you know what, SEO at SEER is nothing like any of the above. I mean, maybe the bottom left picture is a little accurate because people at SEER do geek out from time to time. But we don’t wear trench coats, we’re not agency a-holes & Google doesn’t rule over us. So if you’ve been thinking about a job in SEO but you’re not quite sure, I hope these four mantras can help you.

And lucky for you, there’s no time better than now because we’re hiring!